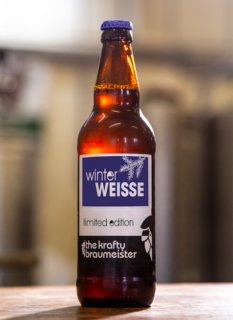 Suffolk-based brewery The Krafty Braumeister has launched Winterweisse, a limited-edition wheat beer brewed in the style of a traditional Weizenbock. Winterweisse has been brewed especially for cold and dark winter nights. It is a very fizzy taste explosion of banana and slight orange flavours. Weizenbocks are a strong wheat beer loved for their higher ABV% and high amount of wheat malt. This style is fermented slightly longer than a usual wheat beer to add an extra kick. Winterweisse pairs very well with spicy and savoury dishes.

The Krafty Braumeister was founded by Uli Schiefelbein in 2018. Uli’s love for brewing began when he was working in Baghdad, where the only available beers were canned, stored at temperatures above 40°C and brewed under license of two of the world’s biggest breweries. There was only one solution: to brew his own. Uli came to Suffolk in 2013 because of his wife Auriol. After studying historical German beer-styles and learning professional brewing in the UK, they opened The Krafty Braumeister.

Uli comments, “I love cracking open a bottle of Winterweisse during the dark winter nights. The colour, the aroma, the fruity and sweet warming flavours give me such pleasure – it’s like a little ray of sunshine! This beer is a real treat for me, and I dearly enjoy brewing it.”

There are four main steps that The Krafty Braumeister does differently to most other breweries. Krafty freshly grind the malt grains on brewing day. This process ensures that the grains’ full flavour ends up in the beer and doesn’t evaporate through long storage. Krafty then use step-infusion to prolong the brewing process and make sure that all the sugars within the grains get into the beer. During mashing, temperatures are increased in stages, ranging from approximately 40°C to 78°C.

All Krafty beers are pure beer. The sugars found in the beers are solely produced from the grains. They do not add chemicals to speed up the fermentation process, nor do they add finings to clear up the beer’s appearance. Krafty’s beers are also not filtered to ensure that all the natural full flavours and aromas are maintained. Before decanting into bottles and kegs, Krafty adds fresh yeast and unfermented wort into the fermenting vessel, a process called ‘Kraeusening’. This continues the carbonation process and ensures that carbon dioxide is produced naturally in the bottle, which adds refreshing fizziness.

Press release from The Krafty Braumeister