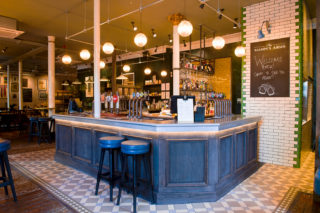 The Mason’s Arms [169 Battersea Park Road, Battersea, London, SW8 4BT] re-opened its doors, following an extensive two-month refurbishment. The Fuller’s pub in the heart of Battersea now offers and even larger range of beers and has an exciting menu of delicious, freshly cooked dishes to accompany them.

The pub’s new look catches the eye from the road outside – with the traditional pub now painted a stand-out shade of turquoise. The interior boasts exposed walls and a selection of historical artefacts sourced from the local area – with vibrant pops of colour giving a modern feel. There are plenty of tables for diners and drinkers alike to enjoy the pub’s welcoming atmosphere – with table service throughout the pub.

The Mason’s Arms is a beer-lovers paradise, with approximately 60 beers available. The bar has 23 draught lines – 20 keg and 3 cask – with space for 15 rotational beers. Keeping things local, the team from the pub have worked with Battersea-based brewers Mondo to brew their own exclusive beer – Local Treasure, a 4.0% ABV cream ale. They also have a number of USA beers available, something for their American neighbours at the Embassy down the road. With the full range of Fuller’s beers available, old and new brews sit side by side meaning there’s something for everyone. General Manager Simon Townsend and his team will be hosting tap takeover events with the first one scheduled in October featuring Leeds brewer Northern Monk and another scheduled in November with Siren Brewery from Berkshire.

For those looking for some delicious food to accompany their pint, Head Chef Jon Stewart has created a menu of British pub classics combined with interesting new dishes – with plenty of options for meat-free diners. There’s also a selection of bar snacks for those looking for a lighter option.

Fred Turner, Retail Director at Fuller’s, said: “We are delighted with the scheme at The Mason’s Arms. It’s a fantastic pub in a thriving part of London. The new look certainly draws you in and the food, beer and atmosphere will keep you there. It’s a great example of a true British pub, with a focus on fantastic beer and top-quality food – surely a winning combination in anyone’s eyes.”

A selection of photographs can be downloaded here – https://we.tl/t-Ej7edLDt8t

Fuller, Smith and Turner P.L.C. is a premium pub and hotel company. The Company runs 180 Tenanted pubs and 204 Managed Pubs and Hotels, with a focus on delicious fresh, home-cooked food, outstanding cask and craft ale, great wine and exceptional service. The Company also has 817 boutique bedrooms in its Managed estate. The Fuller’s pub estate stretches from Brighton to Birmingham and from Bristol to the Greenwich Peninsula, including 173 locations within the M25. In June 2018 Fuller’s acquired Bel & The Dragon, comprising six stunning country inns (included in the pub numbers above), and the Company also owns The Stable, a craft cider and gourmet pizza restaurant business, which has 17 sites in England and Wales. In April 2019, Fuller’s sold its brewing division to Asahi Europe Ltd.