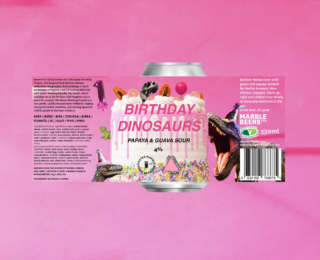 The non-profit, collaborative brewing initiative The Queer Brewing Project is celebrating its first birthday—the anniversary of the project’s launch, 26th April 2019. In order to commemorate this first birthday, Queer Brewing have teamed up with Marble Brewery to brew something with a familiar twist.

The idea for Queer Brewing came from the response to a beer the project’s founder, Lily Waite, brewed with Marble in the summer of 2018: a papaya and guava Gose called Dinosaurs Will Die. Brewed alongside Lily’s art exhibition at Marble’s 57 Thomas Street, the beer’s packaging spoke of the themes of queer and trans identity present within Lily’s work, and was likely the first time a beer in the UK spoke to such themes.

Birthday Dinosaurs is a revisit of sorts to the beer that started The Queer Brewing Project. A papaya and guava Berliner Weisse, the beer’s packaging retains much of the visual identity of Dinosaurs Will Die, but with a tongue-in-cheek, playful update. Intended as a playful distraction from the uncertain and scary times we’re in, Lily and Marble hope that the dinosaurs in party hats will bring, at the very least, a few smiles to drinkers’ faces. A proportion of proceeds will be donated to an LGBTQ-focused charity.

Despite closing both sites, The Marble Arch Inn and 57 Thomas Street, Marble have continued to get beer out to loyal customers in Manchester. With an increase in local demand for canned beer, the team have been driving beer across the city to quench drinkers’ thirst, and have continued brewing, though in a reduced capacity. They are also determined to continue supplying trade as it’s important to them that the independent beer retail sector does not disappear during this stressful time.

Now taking place remotely rather than the big party originally planned, Queer Brewing’s birthday celebrations will still be going ahead. As well as launching the beer for both home and trade deliveries (via Marble), Queer Brewing will be running two social media campaigns to celebrate, announced today—there will be prizes. New Queer Brewing merchandise, delayed by the unfolding of the COVID-19 crisis, will be released.

Although in the midst of an unexpectedly quiet period due to the ongoing crisis, Queer Brewing closes out its first year on a high. The initial target was to brew 12 collaborations in the first year, but Lily has brewed 27 beers with over 30 different collaborating partners in the UK, Denmark, Norway, Germany, and America, with breweries big and small. The as-yet unconfirmed total of donations will be close to £25,000, benefiting charities across the world fighting a broad range of issues impacting the LGBTQ+ communities. Throughout the year, Queer Brewing has been lauded by the beer industry, with US publication VinePair naming it one of the top 10 international beer stories of 2019, and dubbing Lily ‘the LGBTQ icon the beer world deserves’. In February, Lily was awarded ‘Trailblazer of the Year’ in Imbibe’s Personality of the Year 2020 awards.

On the Birthday Dinosaurs collaboration with Marble, Lily says: “Considering that the whole project grew from Dinosaurs Will Die, it only felt right that the first birthday beer be brewed with Marble. I was over the moon when Jan Rogers and Joe Ince (Marble’s director and head brewer, respectively) eagerly agreed to brew this beer, and I couldn’t be happier with the outcome. I’m proud of what Queer Brewing’s achieved, but also of the relationships I’ve built with collaborating breweries, and this beer is a testament to one of those friendships.”

The beer will be available through Marble’s online webshop:
https://marblebeers.com/product-category/?term=beers

More information about The Queer Brewing Project can be found here:
https://www.thequeerbrewingproject.com/