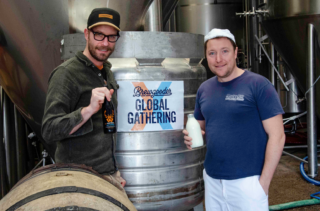 The Wild Beer Company challenge perceptions in the brewing industry by creating a beer which uses no water in its recipe. Profits from this groundbreaking innovation will go towards providing clean water projects in developing countries.

The Somerset brewery has collaborated with Brewgooder, a Scottish social enterprise on a mission to bring clean water to developing countries, for its first global gathering. The campaign will bring 250 brewers from 24 countries together to simultaneously release unique, small-batch beers , with all proceeds going towards The Brewgooder Foundation’s clean water projects in 2020/2021.

Wild Beer’s lead brewer – Russel Sykes has described the beer, aptly called, ‘No Water’ as “perhaps our greatest achievement yet”. He said, “We are always challenging ourselves to push boundaries and achieve things that we haven’t done before.” “This hasn’t been without its difficulties, after a couple of years of failed trials we finally cracked it and are incredibly excited to release this waterless beer. This isn’t a gimmick, this is just a great beer which was inspired by Brewgooder’s global awareness campaign for Malawi”.

To make the waterless beer, brewer Russ replaced the most vital brewing ingredient, water, with Whey from the brewery’s neighbours at Westcombe Dairy. The Whey is a waste product from the dairy’s cheddar cheese production which has been made on the Westcombe site for over a century.

The ‘No Water’ beer is a milk stout which has been untraditionally brewed without adding lactose due to the natural milk sugars occurring in the whey. The inspiration came from the Wild Beer teams love for Terry’s chocolate orange, the finest cocoa nibs and orange zest are added to create a delicious rich & moreish stout.

The Wild Beer Co has never been afraid to push the boundaries with its brews often inspired by culinary ingredients & flavours. Some of their previous brews have included seaweed & mushrooms to bring an umami character and a beer inspired by a Lobster Bisque using shellfish!

Alan Mahon, Brewgooder’s founder, said: “The Global Gathering shows what the craft beer community is capable of when we collaborate and use our shared passion to make a positive impact.

“What the Wild Beer company has done is a perfect example of what our industry is capable of, through their collaboration with another local business, and willingness to spend time and effort to create a positive change in society, they have innovated to create an amazing beer which will inspire brewers from across the world to make their own waterless beer. “By being involved in the campaign, they will help empower 100,000 people by giving them clean water, something the rest of us take for granted. “

‘No Water’ will be launching on March 20th alongside hundreds of other releases for Brewgooder’s global gathering. It will also be pouring at Bristol’s Wild Beer at Wapping Wharf from March 20th and Wild Beer’s ‘Beer & Cheese Festival’ on May 16th. Available for pre-order online from Friday 13th March at wildbeerco.com