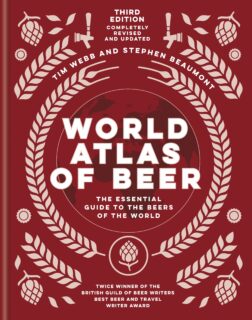 The Essential Guide to the Beers of the World

The World Atlas of Beer  – the busy professional’s guide to what was really happening in the brewing industry across the whole world pre-COVID, in one easy-to-read volume.

In the last five years to Spring 2020 the brewing industry in the UK and across Europe had been getting interesting. As larger brewers watched their big brands steadily losing their appeal, thousands of independent and smaller brewers were making beer sexy again, attracting new audiences with different expectations. Intriguingly, the large players were coming to realise that they needed the inventiveness and drive of smaller craft brewers for beer to gain credibility once more, while the small independent companies were recognizing they needed to work with the largest to allow them access to the market.

By January of 2020, well over 25,000 breweries populated the planet, with growth major hotspots in places as diverse as Mexico, Brazil, South Korea and Eastern Europe, as reflected in the ever-increasing scope of this book, which now covers progress in over 125 countries.

Then, along came COVID-19, reintroducing uncertainty to the beer business. With the situation changing daily, will governments look to global corporations to help them tackle financial mayhem in exchange for turning a blind eye to an increase in constrained trading? Or will the triumph of the human spirit, exemplified for half a century by the revival of small independent breweries, once more push back corporate mundanity?

An overwhelming majority of those 25,000 plus breweries are tiny operations, often reliant on sales in their taprooms and out of their front doors, placing them among the most vulnerable of small businesses. However, the thirst for beer with flavour and character will no sooner vanish than will the need to gather with friends and family and colleagues over glasses, pints and bottles of what has for millennia been the world’s most sociable beverage. Probably. Hopefully. Maybe.

The World Atlas of Beer, now in its third edition, is a top to toe rewrite. It is the authoritative and essential guide to beer’s past, present and future, describing the rich traditions of Belgian brewing, legendary Nordic farmhouse beers, the place of cask ale in today’s world, modern phenomena like lazy hazies and kettle sours, and why Brazil and Italy will bring as much or more to beer’s future as will Germany and the Czech Republic.

The World Atlas of Beer is the perfect guide to finding your way through the new world of beer and explore the best beers it has to offer.

Tim Webb began writing about beer when most of what could be said about the best had to be reported in the past tense. In a career spanning 40 years he has witnessed and chronicled the return of craft brewing around the world, a response to perhaps the most extraordinary consumer-led reversal of modern times. After six years on the board of the Campaign for Real Ale (CAMRA), during which he ran Britain’s national beer festival and co-founded its publishing company, he went on to write eight editions of Good Beer Guide Belgium and six other titles, for which he has won awards in four countries. He lives in Bristol and is widely regarded as one of the world’s leading authorities on UK and European beer.

Stephen Beaumont is recognized internationally as one of the leading writers on beer in the world today. He is the author or co-author of fourteen additional books, including Will Travel for Beer, The Beer & Food Companion, and three editions of The Pocket Beer Book, and a contributor to many others. Through his more than thirty years spent covering the global beer scene, Stephen has written literally hundreds of articles and columns for publications as diverse as Whisky Advocate, Playboy and The Globe and Mail, and hosted tastings, dinners and educational events around the globe, from Mexico City to Burton-on-Trent and Philadelphia to Beijing. He may be found online at beaumontdrinks.com and on Twitter and Instagram at @BeaumontDrinks. When not travelling, he lives with his wife in Toronto, Canada.