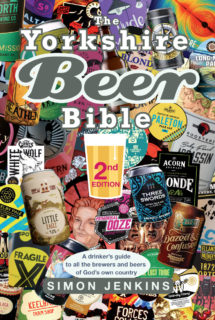 A new edition of the Yorkshire Beer Bible by Guild member Simon Jenkins ­is out now, published by Great Northern Books.

In this newly-updated encyclopaedia of Yorkshire brewing, journalist Simon Jenkins trawls the length and breadth of Britain’s biggest county seeking out the brewers old and new, large and small, which between them have created an astonishing resurgent beer scene. It is the drinker’s essential guide to the brewers and beers of God’s own county.

Simon takes readers on an entertaining journey around more than 200 breweries, from fiercely traditional brewers producing time-honoured beers in slate Yorkshire squares, to the new-wave craft brewers embracing a dizzying variety of imported hops; from the ancient brewer hemmed in by a tight knot of cobbled streets to the brewhouse creating opportunities for young adults with life-limiting conditions.

With the inclusion of more than 30 new breweries which have opened since the first edition in 2017, Simon highlights some of his favourite beers – and meets many of the brewers who make them.

The book is available from Great Northern Books on 01274 735056 or from https://www.gnbooks.co.uk/product/the-yorkshire-beer-bible-second-ed