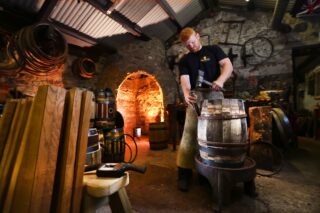 For the first time in a generation, a historic ‘Trussing In’ ceremony, where an apprentice barrel maker – or ‘Cooper’ – graduates to become a Journeyman Cooper, will take place at iconic Yorkshire brewery T&R Theakston.

In a ceremony largely unchanged for hundreds of years and tracing its roots back to the 14th century apprentice Cooper, Euan Findlay, will be Trussed In on Thursday 7th October by fellow Coopers who have gathered from across the country before completing his initiation into the Federation of Coopers.

Theakston is one of only two breweries in the UK to still have an in-house cooperage, a tradition which it has maintained since it was established almost 200 years ago. The last time it Trussed In a Cooper was more than 20 years ago.

Beginning with the “ringing of axes”, the custom involves the construction of a 54-gallon cask, also known as a Hogshead, into which Euan will be inserted in front of an audience of friends, family, colleagues and invited dignitaries. He is then rolled around the brewery yard before being unceremoniously sacked as an apprentice and immediately re-employed as a fully-qualified Cooper.

25-year-old Euan, from Bedale began his apprenticeship with Theakston five years ago, learning the ancient craft of making the wooden casks designed to transport beer, including Theakston’s famous Old Peculier ale. His Trussing In was originally scheduled for May last year, but was delayed due to the pandemic.

To celebrate this important milestone the brewery has also announced the launch of a new pale ale to honour the occasion, Theakston Stave Bender, which will also be served on the day.

Joint Managing Director Simon Theakston said, “We have not had a Trussing In Ceremony for over 20 years, so we are very much looking forward to this special occasion to mark a great achievement for Euan. We look forward to welcoming him into the company as fully qualified Journeyman Cooper and toasting the moment with a pint of Stave Bender.

“While Coopering is no longer practiced in many breweries across the country, we have always maintained the tradition and we’re also now seeing a renewed interest in the craft as many traditional and new brewers are seeking to explore more cask conditioned beers.”

Euan commented, “I’m excited for the day itself and to be able to celebrate my graduation with my colleagues, friends, family and fellow coopers. It will be a very special moment and one that I shall remember for the rest of my career.”