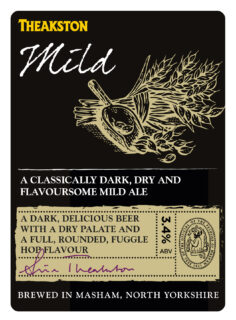 Yorkshire brewery T&R Theakston has announced that to mark CAMRA’s Mild May, an initiative designed to showcase mild ales from across the UK, it will be brewing a batch of its classic Theakston Dark Mild ale in cask form.

It is the first time in several years that Masham-based Theakston has brewed a cask mild, following a resurgence in customer demand for traditional brewing styles and cask-conditioned beers.

Available as a guest beer, Theakston Dark Mild is a 3.4% ABV dark ale brewed with pale, crystal and black malts. It uses a combination of Progress, Challenger and Fuggle hops to present an ale which is both low in alcohol and high in flavour. It will be available to stock in pubs and bars nationwide.

The brewery has long championed traditional ale styles and has continually brewed mild ales in either keg or cask form since its establishment almost 200 years ago.

Commenting on the reintroduction of Theakston Dark Mild in cask, joint managing director Simon Theakston, said: “In recent years, the explosion of microbrewing and increased interest in alternative beer styles has paradoxically rekindled interest in foundational, traditional ales such as mild.

“Alongside this, microbrewing’s popularity has also generated a renewed interest in cask-conditioned beers, and Theakston Dark Mild in keg has long been a staple of our core range. Based on this, we feel that there is no better time to respond to customer demand and brew the cask version of our Theakston Dark Mild as a guest ale.

“This relaunch is a particularly special one for me. Mild was one of the original few beer styles brewed by my great-grandfather Robert Theakston when he founded the brewery in 1827, so it is great to bring back a cask version of an ale style which is so intimately tied to our long history. While as always, we are led by the desires of our customers, should Theakston Dark Mild in cask turn out to be as popular as it once was, we would be thrilled to make it a more permanent fixture of our portfolio.”