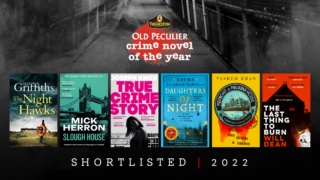 The shortlist for the 2022 Theakston Old Peculier Crime Novel of the Year award has now been announced.

It is the 19th year that Theakston Old Peculier has been a sponsor of the festival, which has always had a long association with crime, taking its name from Masham’s historic Court of the Peculier, which in medieval times allowed the parish to govern its own affairs when dealing with civil law.

Selected by the public from a longlist of eighteen novels, with a record number of votes being placed this year, the shortlist of six novels features newcomers to the shortlist, two New Blood panellists, a previous Festival Programming Chair, and a five-time shortlistee. None of this year’s shortlistees have ever taken home the prize before, making the competition even more tense.

In anticipation of the Crime Writing Festival, the brewery repackaged its bottled Old Peculier to include a bloody thumbprint and the festival logo. These limited-edition bottles are currently available in all shops, bars and restaurants stocking the 5.6% ruby red ale.

In addition to the specially branded bottles, Theakston ales, including Old Peculier, will also be readily available throughout the festival, including in the bar at the Old Swan in Harrogate.

The six novels shortlisted for the Theakston Old Peculier Crime Novel of the Year 2022 are:

Sharon Canavar, Chief Executive of Harrogate International Festivals, which organises the festival alongside T&R Theakston, added: “We are delighted to announce this year’s Theakston Old Peculier Crime Novel of the Year shortlist, featuring six novels by some of the most exciting crime writers working today. Whisking readers around the world and through time, this shortlist is a fantastic demonstration of the variety to be found in crime fiction. The public have a tough task ahead choosing just one winner and we can’t wait to see who they vote for!”

The public are now invited to vote for a winner at www.harrogatetheakstoncrimeaward.com. Voting closes on Friday 8th July, with the winner to be revealed on the opening night of Theakston Old Peculier Crime Writing Festival, Thursday 21st July.

The winner will receive a £3,000 prize, as well as a handmade, engraved beer barrel provided by T&R Theakston Ltd.

For more information on the festival  and to book tickets, please call +44 (0)1423 562 303, email info@harrogate-festival.org.uk or visit: https://harrogateinternationalfestivals.com/crime-writing-festival/.