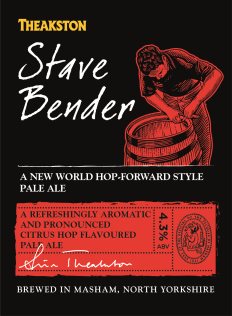 The launch of the limited-edition beer is in honour of the ‘Trussing In’ of Theakston’s apprentice cooper, Euan Findlay. Trussing In is the historic ceremony signifying Euan’s graduation from apprentice to Journeyman Cooper

Brewed for a hop-forward flavour, the pale ale of 4.3% ABV has been created with pale and crystal malts, a grist of Chinook and Comet hops, infused with El Dorado and Cascade hops, to give a zingy, citrus flavour and aroma.

Simon Theakston, joint managing director at T&R Theakston said, “Following the launch of our Theakston Summit over the summer, we are delighted to announce the launch of another pale ale in the form of Stave Bender. Not only does the launch mark a milestone moment for us as a brewery, celebrating a once-in-a-generation Trussing In Ceremony, but it also underlines our commitment to supporting the wonderful craft of coopering; making casks from finest quality oak wood.”

He added: “In line with the growing demand for refreshing, hop-forward pale ales, we developed Stave Bender using a blend of new world hops. We have a proud record of product innovation based on nearly two centuries of knowledge and craftsmanship, and the availability of ever-increasing new varieties of hops allows us to maintain that reputation.”

Theakston Stave Bender will be available to pubs and bars across the UK in October.

For more information on Theakston’s, visit: https://www.theakstons.co.uk/. If you’d like to stock Theakston Stave Bender on your bar, please contact sales@theakstons.co.uk.