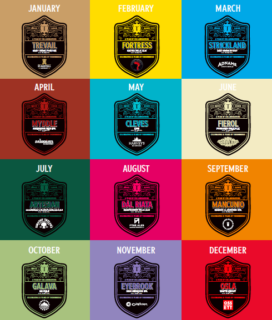 Thornbridge Brewery is set to celebrate their 15 year anniversary in 2020 and as part of the celebrations have lined up no less than twelve collaborations with the very best of the UK brewing scene for their Year of Beer series.

Thornbridge, who have been brewing cask beer since 2005, felt that joining forces with some of the key players in the UK cask beer scene was the perfect way to commemorate their anniversary. Championing cask beer has always been a priority for Thornbridge and they’re delighted to be collaborating with such great brewing talent.

The twelve collaborations will be kicking off in January with Trevail, an East India Porter brewed with the independent and family owned St Austell. Following this will include brews with Adnams, Harvey’s, Fyne and Burning Sky as well as an exclusive collaboration with multi award-winning Yorkshire based Timothy Taylor’s to name but a few.

Having always championed high quality and innovative cask beer Thornbridge have worked closely with each brewery to create an enviable range of styles, including a mango and jasmine IPA with Marble, a white stout with Ossett Brewery and a DDH session IPA with Oakham Ales.

“We love cask beer and we’re delighted to be collaborating with such a range of incredible breweries. Many of these have become close friends of Thornbridge over the past 15 years and its fabulous to be able to celebrate together.

We’re constantly evolving our beer range and the opportunity to work with the best of the UK beer world to create something seriously special is incredibly exciting, for us cask beer is thriving as much as it ever was and we hope to bring it to even more people.

“Timothy Taylor’s are delighted to be collaborating with Thornbridge Brewery as part of their 15th birthday celebrations. Best wishes to them; onwards and upwards!”

Not only dedicated to crafting cask beer, Thornbridge are entering 2020 with big plans, a keg year of beer will also be released alongside their cask collaborations, including a brand new low alcohol variant, Jaipur IPA will be celebrating its 15th birthday in July and plans for a brand new Tap room are currently underway.