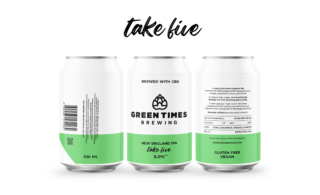 Following the successful release of their CBD IPA and CBD Alcohol-Free IPA in cans, speciality craft beer brewing company ‘Green Times brewing’ are releasing their ‘Take Five” CBD New England IPA in cans, extending their range of naturally chilled beers to unwind with nature in mind as they put it.

“Take Five” is a super juicy New England IPA brewed with CBD packed with tropical fruits, mango, passionfruit and a touch of pine. As with all Green Times products, it will be infused with 10mg of cannabis oil extract (THC-free).

From the cereals and hops they use to produce their beers, to the high quality CBD they source and the planting of trees for every order to offset some of their carbon footprint, they keep the environment and sustainability in mind at every stage of the process.

Green times guarantees to its customers to only use the finest cbd oil in all of their products, implementing a stringent testing policy, something important to note in a market still finding its feet with regulation.

The “Take Five” is brewed in London with an exciting array of hops including Citra, simcoe, mosaic & columbus.

Owner and co-founder Thierry Florit has said regarding the release;

“After a slow year due to the pandemic, we are so excited about the “Take Five” release and bringing something different to craft beer lovers from what’s out there combining the much loved american fruit driven pale ale style with high quality cbd oil.”

Following their two collaborations with Northern Monk over the past year and release of the “Green Heathen” – a twist on one of Northern Monk core range – this CBD New England IPA was a pure fruit bomb at 7.3%. “The Take Five” is inspired somehow with some similar hops with a milder fruit concentration, making it more sessionable at 5% abv.

There is no doubt that cbd products have become even more popular all over the world as well as in the UK with the current sanitary crisis as people are looking for ways to keep a positive mind set and cope with stress.”

Green Times Brewing was founded in 2018 with the simple idea to brew quality craft beers with CBD to combine the well-being benefits of the cannabis plant to a relaxing drink.

All their beers are infused with cannabis oil extract (CBD) for a natural way to unwind. They are also vegan friendly, gluten-free and brewed in the UK.

Sustainability and the protection of the environment being very important to them, they have committed themselves to plant a tree for every beer box sold in order to partly offset our carbon footprint.

That way, they and the people drinking their beers are both contributing to the fight against climate change. Their alcohol-free IPA is also back in stock.

You can order directly from their website (trade customer will need to register first by emailing sales@greentimesbrewing.com)

Note that they are offering a 10% discount to all new customers by signing up to their newsletter on their website and to all new trade customers for their first order for a limited period of time.