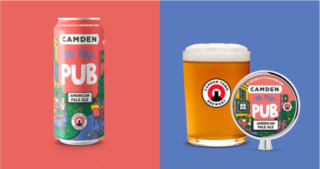 All proceeds from every can sold, will go to supporting pubs

We are SO excited for the return of pubs, but we know there’s still lots of challenges ahead. After a rough few months of change and uncertainty, we want to help pubs get pouring again, with what we do best – fresh beer. That’s why we’ve made To The Pub American Pale Ale; a new one-off beer, brewed to support and celebrate the industry we love most at its time in need.

When pubs officially reopen, we will be giving 260,000 pints of To The Pub to our customers for free, so they can make a higher margin on every pint and get more cash in the till to help them get back on their feet as quickly as possible.

But before then, we’re kicking off the campaign by launching To The Pub in 500ml cans, available to buy from our Camden web shop from Friday 26th June, and at selected retailers and convenience from July. We’ve experienced a healthy growth of our business in the off-trade and our own web shop during the lockdown, so we wanted to leverage those channels as a way to support the on-trade. All the proceeds from these ‘To The Pub’ cans will be used to contribute towards funding production of the kegs we’ll be giving to pubs.

To The Pub will launch on tap when pubs and bars are back open, and consumers can continue to show their support by enjoying a pint at their local participating pub. We want to make sure that people going back to pubs can experience a great tasting fresh pint of beer, whilst helping out the industry we love. We’ll be supporting with To The Pub POS, including t-shirts, beer mats & tap badges.

This is our first large scale through the channel campaign and we’re really excited to help one channel with the other.

To The Pub is a 4.0% double dry-hopped American Pale Ale, unfiltered and brewed with clean Cali ale yeast. We added Simcoe Cyro hops and new experimental hop, Idaho 7, later in the brewing process by double-dry hopping to get those big, resiny stone fruit flavours true to the style. The design celebrates the pub life that we all love and miss and has been created by our 2020 seasonal illustrator Gaurab Thakali.

Jasper Cuppaidge, Founder of Camden Town Brewery says: “Never would I have thought that the industry that’s brought me so much, would need so much help to survive. It needs all of us, from brewers to beer drinkers, to help this industry get back to stable ground. By drinking To The Pub, whether it’s a 6-pack ordered online, a can you picked up at the shop, or enjoying as a pint in the pub, you’ll be giving back to the hospitality industry when they need it most.”

Adam Keary, Managing Director of Camden Town Brewery says: “The on-trade is extremely important to our business, making up 85% of our total volume, and we want to do all we can to support our customers. Since lockdown, we have seen a shift to e-commerce & the off-trade, and with pubs re-opening soon, we wanted to use the success we’ve seen in those channels to support the on-trade”.

Following the success of our Heroes Thank You Lager, recently launched to support healthcare frontline workers, we are excited to create another movement and use our fresh beer as a force for good to support another great cause, this time around the hospitality industry.

So, if like us, you’re ready to celebrate going back ‘to the pub’, then let’s cheers to the pub with a 6-pack to support the industry.

To The Pub American Pale Ale will be available from:

Pubs who want to participate will be able to do so by getting in touch with the Camden Beer Team or email us at sellmebeer@camdentownbrewery.com

In May, Camden rebranded its Camden Hells to Camden Heroes Lager in support of the NHS workers across the UK. All proceeds of the beer sales were donated to NHS charities, and NHS workers were able to claim a 6-pack on Camden.

Camden Town Brewery continued support for Hospitality Action’s COVID-19 Emergency Fund by hosting an auction on Twitter for the most valuable pint of Camden Hells delivered to two metres from one lucky beer fan’s front door. The pint was sold for £800, with Camden matching the winning bid.