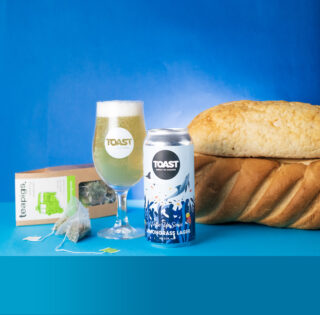 Craft brewery Toast Ale has released the second beer of its Rise Up campaign, seeking to raise awareness of our broken food system, and galvanise action to fix it for people and the planet.

And the label carries an important message about our oceans:

“Plastic pollution and the way we fish is threatening life in the oceans. But one-quarter of fish are discarded and half of the plastic we make is for single-use. By reducing waste and plastic use, and by protecting and restoring marine ecosystems, we can sustain life and improve our health.”

Beer lovers can do their bit by enjoying a cheeky pint. All profits from the beers will go to the environmental charity Feedback to support their campaigning work on food systems in the lead up to COP26.

But Toast is also calling on drinkers to be activists.

Food production is the biggest impact humans have on the planet. It’s the biggest driver of deforestation, use of freshwater, source of greenhouse gas emissions, and cause of the mass extinction of species that we are witnessing. Yet one-third of all food is wasted – 1.3 billion tons per year.

In the lead up to COP26, the 26th UN Climate Change Conference of Parties, Toast is releasing a series of limited edition beers with fellow B Corps Divine Chocolate, teapigs, Hobbs House Bakery, Oddbox, Rebel Kitchen, Rubies in the Rubble and Cafedirect. Each beer will highlight an element of the ecological crisis, and the change needed to the food system to meet the goals set in the Paris Agreement at COP21.

A QR code on the can directs people to Toast’s website where they can learn about each beer and the environmental story. They can also write to their MP using a simple form, asking them to be an advocate for climate and nature, and to take the food system into account in environmental policy.

Toast’s co-founder & Chief Operating Officer, Louisa Ziane, explained “We want to celebrate positive action including not wasting food, eating a more plant-based diet, reducing our use of single use items, and supporting responsible businesses like social enterprises and B Corps.”

“But” Louisa said, “we need ambitious, sustained action by policy makers, businesses and citizens to deliver transformational, systemic change. We need legally-binding targets and progressive environmental protection policies that will force all businesses to act and create an incentive for ecological renewal.”

It’s time to Rise Up (over a beer that does the world of good).

Toast brews planet-saving beer using surplus fresh bread. This prevents food waste, and reduces the demand for malted barley, and thereby the demand for land, water and energy. Toast open sources a recipe for home brewers and collaborates with breweries all over the world to scale its impact. All its profits go to charities fixing the food system. Toast is a social enterprise and the first UK brewery to become a B Corp.

About teapigs
Teapigs was the first tea company awarded the Plastic-Free trustmark from A Plastic Planet, which certifies that packaging is free of conventional plastic derived from fossil fuels. It supports tea growing communities in Rwanda and is also a member of The Ethical Tea Partnership (ETP), a not for profit working to improve tea sustainability, the lives and livelihoods of tea workers and smallholder farmers, and the environment in which tea is produced. It is a certified B Corp.