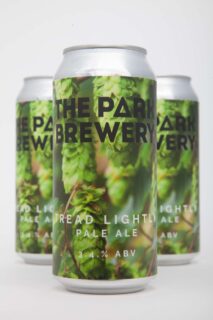 Craft beer maker, The Park Brewery, has joined forces with Friends of Richmond Park to help promote a nature conservation campaign called ‘Tread Lightly’, which has been launched to help protect London’s very own National Nature Reserve; Richmond Park. The campaign features a film from David Attenborough, which urges people to look after the park and can be seen here: https://www.youtube.com/watch?v=LMGKSwqryso&t=50s

To help spread this message, The Park Brewery have launched this limited edition pale ale named ‘Tread Lightly’ with a reduced carbon footprint – all the ingredients are from the UK including locally sourced hops from an Epsom garden.  Dry hopped with English hops Olicana and Keyworths Early, it has a low abv (3.4%) but it packs a fruity punch, with flavours of cedar and pine and a citrus finish.

Says Richard Gray, Chairman Friends of Richmond Park and film producer “it was a natural fit for us to team up with local brewer, The Park Brewery, to amplify the campaign’s messages and engage people at a local level. The Park Brewery has many loyal and local fans that we are sure will get behind our campaign and follow David Attenborough’s simple steps to take care of the park.”

Says Frankie Kearns Co-Founder, The Park Brewery “Richmond Park is our heartland and we are delighted to be getting behind a campaign to celebrate, and preserve its beauty. Given its name – Tread Lightly – our beer is a low ABV, session beer with delicate and subtle flavours and hints of tropical fruits. We hope to reinforce the key messages of the campaign and remind people to leave nothing behind and take nothing away, when visiting the park.”

Tread Lightly is on sale from 30th September 2020 and available on The Park Brewery web-shop as well as local stockists, close to Richmond Park.  (The image on the can taken by Josh Kearns, is of the actual hops which were used in the beer).