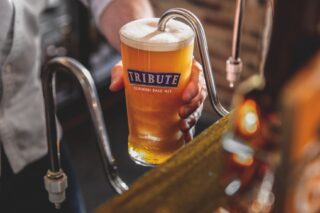 St Austell Brewery’s flagship beer brand, Tribute, is the UK’s most loved ale, according to the ‘Top 100 Most Loved Drinks Brands’ – the latest report from market research company, Savanta (November 2020).

The consumer insight report is drawn from the opinions of over 96,000 consumers. It has revealed the UK’s most popular drinks brands for 2020, with performance rankings from across all major categories – beer, cider, wine, spirits, soft drinks and no/low alcohol drinks.

While Guinness came out top in the ‘Stout & Ale’ category, Tribute was the number one most loved ale. In terms of brand image, Tribute scored highly with consumers. 25 per cent said the ale was ‘full of taste and flavour’, 23 per cent described it as ‘easy drinking’ and 22 per cent considered it a ‘classic’ brand.

Tribute pale ale – one of the West Country’s most famous beers – is brewed with Cornish gold and Maris Otter malts and is light, hoppy and zesty. With refreshing orange and grapefruit flavours, thanks to a hand-picked blend of Fuggle, Celeia and Willamette hops, everything about Tribute is carefully considered – from its specially sourced ingredients, through to its exacting brewing process.

Andrew Turner, Managing Director of St Austell Brewery’s Beer and Brands said: “We’re very proud that people hold Tribute so close to their heart. Both its taste credentials and consistency have made it a firm favourite with beer lovers for over twenty years and it has a loyal and growing following to this day.”

The company owns over 180 pubs, inns and hotels across the West Country – including managed houses and tenancies.