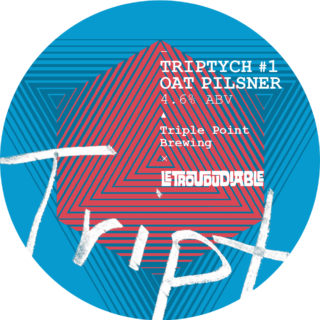 “It definitely has an element of the perverse,” says Alex Barlow, over a glass of Triptych in the on-site taproom at Triple Point Brewery, on the south side of Sheffield city centre.

With a hefty dose of oats in the grain bill, French aroma hops, Triptych, lagered for 100 days and unfiltered, is a pilsner like no other.
This genre-busting lager is the result of a collaboration between Alex, head brewer at Triple Point, and Andre, Luc and Micho, the senior brew team from Le Trou Du Diable in Quebec.

Andre and Alex go back a long way: “We met at a beer festival about eight or nine years ago when I was hosting a stand of British beers. We got on famously and I loved their beers. A few years ago I went to their brewery during a trip to Canada, and we brewed a collaboration 7% mild which they cheekily called Lord Barlow!”

Triptych (4.6% ABV) returns the compliment, blending English and French-Canadian influences to create a pilsner which would probably have most Bavarian brewers scratching their heads in bewilderment. It was hopped in three phases, first with Admiral for bittering – “we use that in a lot of our beers”, says Alex – then Aramis, before late-hopping with the classic French aroma hop Strisselspalt, itself a nod to the beer’s Quebecois influences.

And then followed a 100-day lagering, time enough for the oat proteins to settle at the foot of the tank, clarifying the beer without the need for filtration. Even so, just as they bring a soft, rounded quality to oatmeal stouts, here they lend noticeable smoothness and body – as well as a slight cereal note to the aroma.

Though most of the beer is destined for bottling, a draught and dry-hopped version was unveiled recently at Triple Point. But the Triptych name references a work of art divided into three sections – and the collaboration brew is receiving three quite distinct treatments.

A third of it will become Triptych II, where the left-field additions of champagne yeast and Canadian maple syrup – plus the influence of a further 100-day ageing in French Sauvignon Blanc barrels – have created a sharper, thinner, dryer beer with a distinct crispness and woodiness which can only be the product of the oak. This secondary fermentation raises the beer to 5.5% ABV.

Blending the beer with L’Ours (the bear) a strong sour Saison from the Canadian brewery, with a similar addition of maple syrup and 100 days maturation gives Triptych III a more distinct funky tartness, though the extra strength (around 6%) lends warmth and substance too.

Triple Point launched their first beers in March.“We’re concentrating on lagers here, and trying to experiment and have some fun with them,” says Alex. “There are a lot of brewers trying to do different things but we are one of the few doing it with lager. We believe we can carve out a niche and a speciality for it.”

Triptych is their first collaboration – and while the original beer is now available on draught in the brewery bar, once the barrel-ageing is complete, all the varieties will be bottled, with a Christmas three-pack giving drinkers the perfect opportunity to sample the whole range.