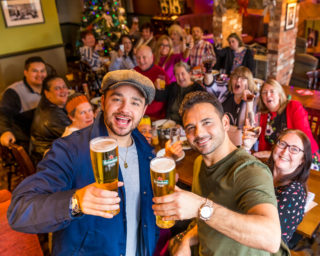 From a swift half in the Rovers Return to a pint in the Woolpack, countless friendships have been made, family events celebrated and worries halved over a drink at these iconic soap opera pubs.

Now, former soap stars Adam and Ryan Thomas – or Adam Barton and Jason Grimshaw as they’re better known – are bringing a bit of the good cheer and community spirit seen in the fictional pubs to life, as part of HEINEKEN’s mission to combat loneliness, which is now in its third year.

At a time when nine million people in the UK say they experience loneliness, Brewing Good Cheer will bring together nearly 2,000 lonely or socially isolated people to network and make new friends over a festive lunch in their local pub.

Star Pubs & Bars’ managed estate of pubs are also joining the campaign this year, increasing the number of lunches being held to 100, and serving a three-course Christmas meal with food donated by food wholesalers, Brakes.

As well as charities local to individual pubs, HEINEKEN has partnered with charities from well-known national organisations, such as AGE UK and Royal Voluntary Service, who put on events such as art, drama and music, in order to combat loneliness and encourage people, of all ages and backgrounds, to come together.

The brothers joined local charity Chatterbox and AXM Foundation at a Christmas lunch hosted by The Windmill pub in Manchester.

Former Coronation Street star Ryan Thomas says, “I remember coming out of Celebrity Big Brother and meeting all my family in the pub. It was an important time for me – and it was great to be surrounded by so many people who love and care for you.”

“I’ve felt the same warmth in The Rovers Return where the pub is the heartbeat of not only the show, but the wider community and is a hub of people meeting friends and family, talking through problems to celebrating – there’s no place like it!”

Adam Thomas adds: “There’s no secret that every soap is based around its pub, from The Rover Return to the Queen Vic, or the best of them all: The Woolpack. So I’m thrilled to be working on Heineken’s Brewing Good Cheer campaign and helping to tackle social isolation by inviting people to festive lunches around in the UK.”

Mark Harold, licensee at the Windmill said:   “Lunches like the one we held are really important to bring people together and also to raise awareness in the community that there are people locally who are lonely and won’t have anyone at Christmas.  We had lots of regular customers asking us what was going on during the lunch.   Pubs can help combat loneliness as they are the one place you can go where there is always someone there.  Just being in a social environment will feel less lonely and there is always someone friendly to talk to behind the bar.”

David Paterson, corporate affairs director for HEINEKEN says: “There really is no place like the Great British pub – it’s the place where relationships start, friendships are cemented and memories made. We believe pubs are at the heart of communities and we’re proud to be working once again with so many pub landlords up and down the country who want to make a positive difference not just during the Christmas period, but all year round. We hope through Brewing Good Cheer we’re able to continue raising awareness of the issue of social isolation and inspires more people and publicans, to get involved and brew some good cheer this Christmas!”

Mark Newbery, National Account Controller for Brakes says: “We’re delighted to be getting involved with HEINEKEN’s Brewing Good Cheer campaign to highlight the issue of social isolation and how pubs play a role in bringing communities together. Loneliness is all around us affecting family, friends, neighbours and work colleagues. Pubs are one of the few places left for people of all backgrounds to meet others in their community, that’s why these lunches are so important and why we at Brakes fully support them.”