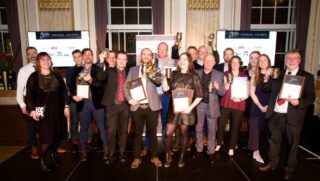 Entries will close for this year’s Guild Awards in two weeks, on 10 September.  Journalists, writers, bloggers, broadcasters and other communicators are encouraged to submit their finest work from the past year to be in with a chance of joining the winners’ podium and taking a share of our highest-ever prize fund of £16,000.

At the same time, Harvey’s has renewed its sponsorship of the Harvey’s Tom Paine Award for Best Citizen Beer Communicator. The award was renamed last year,  in honour of Tom Paine, a citizen communicator and author of The Rights of Man, who was an excise officer in Harvey’s home town of Lewes in the 18th century.  This category is aimed at those who write about beer or pubs for love rather than money, giving them a platform away from ‘big name’ paid writers.

All entries will be judged on how well they further the Guild’s mission “to extend public knowledge and appreciation of beer and pubs”.  Entrants can submit to 13 categories, which include a new award this year for Best Book about Beer and Pubs.

The Guild will publish a shortlist for all categories in November, and winners and runners up for each will be unveiled at the Awards Dinner. One category winner will go on to win the overall Beer Writer of the Year Award and the Guild also will also name its Brewer of the Year, sponsored by SIBA, based on votes cast by Guild members.

The Guild Awards Dinner will be held on 2 December at One Great George Street, Victoria. Tickets for members and guests will go on sale on the Guild website later this year.

Full details of all categories, and advice on how to submit entries, can be found on the Guild’s website. Entries must be received via our dedicated entry website by the closing date of 10 September and works submitted must have been published between 1 October 2020 and 31 August 2021.