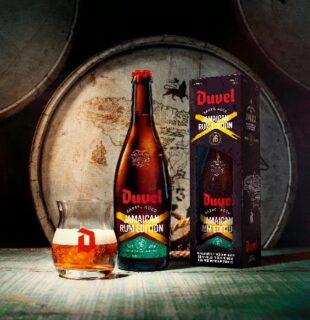 DUVEL Barrel Aged 2021 Batch No. 6 and DUVEL Distilled 2021 will launch in the UK in October and November 2021 respectively.

Launching this autumn in celebration of the Duvel brewery’s 150th anniversary year is Duvel Distilled 2021 (40% abv). The jubilee year kicked off in Duvelish style with the launch of Duvel 6,66%, and the spectacular finale will be the limited Duvel Distilled in a very special bottle.

The extraordinary anniversary distillate has been bottled in a stunning limited-edition vessel in the shape of the iconic Duvel glass with the red Duvel ‘D’ featuring prominently. The sturdy bottle holder is inspired by Duvel’s full head of white foam and the foot of the Duvel glass has been transformed into the cap of the bottle. A run of only 8,000 numbered bottles will be available globally from mid November 2021.

The distillate has been allowed to mellow for a full decade in oak bourbon and sherry barrels, followed by a finish in Moscatel de Sétubal barrels from Portugal. This edition is a true anniversary distillate both in terms of taste and looks, an exclusive one-off; but according to Cédric Heymans, head of barrel aging and distillations at Duvel Moortgat, further original creations will be released in the coming years.

Arthur Motley, Whisky Buyer at Royal Mile Whiskies, comments, “We’ve always loved Duvel of course, and so we were delighted to hear about the 10-year-old Duvel Distilled launching for the Belgian brewery’s anniversary.  Like other whisky fans, we are licking our lips at the thought of getting to try the distilled, aged version of such a legendary brew.”

Duvel Distilled 2021 has a dark red and ochre-like colour and subtle, slightly fruity, nutty notes with hints of vanilla, toffee and raisins. This 10 year old statement is delicious with grilled fish, meat and vegetables such as artichoke and roasted Brussels sprouts, as well as dark chocolate, crème brulée and tarte tatin. Aged, hard cheeses such as Parmesan or Groendael also pair exceptionally well with Duvel Distilled, which is best served in a tumbler glass with ice cubes or simply neat in a small tulip glass.

Duvel Barrel Aged Batch No. 6 The Jamaican Rum Edition (12% abv) – the second of two autumn releases – is the sixth consecutive vintage of the Duvel Barrel Aged release, but the first to be matured in Jamaican rum barrels, which delivers an especially complex beer. Duvel Barrel Aged is golden-coloured with a higher alcohol percentage and decreased bitterness.

Combining the punchy bite of Duvel with the sensational flavour of rum barrels, Duvel Barrel Aged 2021 The Jamaican Rum Edition has been matured in rum casks – just like last year. In 2020, Duvel master brewer Hedwig Neven had wooden barrels from The West Indies Rum Distillery in Barbados installed in the Duvel cellars, but this time he sought inspiration in Jamaica.

This has generously enriched the Duvel beer with the Jamaican spirit’s aromas of vanilla, dried fruit and oak, producing a Barrel Aged Strong Golden Ale, perfect to serve at the end of a festive meal or next to a crackling fire this autumn.  This special beer pairs well with strong cheeses, game dishes, (grilled) meat dishes, chocolate, exotic fruit, pumpkin, sushi or cinnamon. The 100% barley malt is hopped like Classic Duvel with Saaz and Styrian Goldings.

Each numbered 75cl bottle of Duvel Barrel Aged will be sold with a specially designed glass that comes gift boxed; the Duvel tasting glass is a combination of Duvel’s iconic, nucleated tulip glass and a tumbler glass.  Otherwise, the beer is often served in export markets in a wine glass, a tulip glass or a tumbler can and is ideally served at a temperature between 8°C and 10°C.

Taste: A bit more modest than the aroma, but not less interesting. Slightly fruity with a nutty, nice present spiciness, especially nutmeg. A touch of vanilla, toffee, dried raisins. Nice, soft and round mouthfeel with a dry finish. Long taste.

Both products will be available in additional key markets including Belgium and the Netherlands.