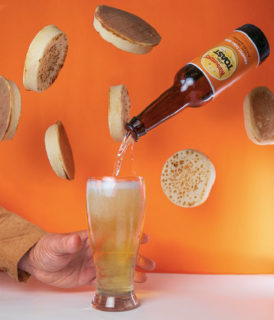 Today, the nation’s number one bakery brand, Warburtons and Toast Ale, announce the return of crumpet beer, after its original launch brew sold out in just five days earlier this year.

This tasty beverage has an alcohol content of 2.8%, and, as before, cleverly transforms surplus crumpets into a refreshingly cold brew. Available from today, the Table Beer brewed by Toast Ale, uses Warburtons crumpets that didn’t quite make the cut but are the perfect ingredient for producing a ‘dough’lightful beer.

Don’t expect any holey crumpets bobbing in the brew – Toast Ale replaces some of the malted barley in the beer with crumpets, extracting starches and sugars and breaking them down into fermentable sugars – meaning the crumpet does more than just flavour the beer. It really does bring new meaning to the phrase responsible drinking.

Whether you missed out the first time or can’t wait to get your hands on the latest beer , don’t waste any time, because you can purchase Warburtons X Toast Ale Crumpet Table Beer on the Toast Ale website for £28 for 12x 300ml bottles available whilst stocks last.

Darren Littler, Innovation Director at Warburtons, says: “We’re thrilled to announce the return of a brew made with crumpets, following the overwhelming response in February this year. We’re so happy to be able to use an innovative way of utilising our ‘wonky’ products whilst celebrating the nation’s love of crumpets in a whole new way!”

Louisa Ziane, Chief Operating Officer at Toast Ale comments: “We had such an amazing response when we first launched our crumpet beer, so we couldn’t be more excited to be back with a new crumpet brew. Our mission remains to brew beer that is planet-saving and palate-pleasing, and this brew does just that. As a British staple, they bring something hole-y different than our bread brewed beer, with a unique taste. We hope everyone loves this new Crumpet Beer as much as we’ve loved brewing and tasting it!”

ENDS
Notes to editors:
The beer is a light IPA with an ABV of 2.8%
Warburtons key facts

● Established in 1876 as a grocery shop in Bolton by Thomas and Ellen Warburton, today Warburtons is actively run by the fifth generation of the Warburton family – Jonathan, Brett and Ross
● Warburtons is the number one brand within the UK Bakery sector with 142 years of baking expertise [1]
● Warburtons is the UK’s most chosen FMCG brand [2]
● With 11 bakeries and 15 depots around Britain – from Aberdeen to Newton Abbott Warburtons spans the length and breadth of Great Britain, baking and delivering 2 million products across the country each day
● With a fleet of almost 1,000 vehicles, Warburtons delivers its 90-strong product portfolio direct to 20,000 stores per day
[1] The Nielsen Company, Unit and Value Sales, 52 w/e 23.03.20
[2] Kantar Brand Footprint June 2020
About Toast Ale:
Food production is the biggest contributor to climate change, but one third of all food is wasted. We’re here to change that. Our planet-saving beer is brewed with surplus fresh bread. All our profits go to charities fixing the food system. We believe that saving the world can start with a beer, all it takes is a Toast to change. So do your bit. Have a cheeky pint. Cheers.