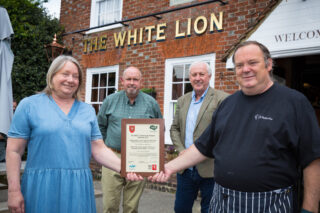 The licensees of a Kent village pub have been recognised for their community work during the Covid-19 pandemic after being secretly nominated for an award by local residents, with a further endorsement from the parish council.

Attending the first face-to-face Selling Parish Council meeting after a year of being confined to Zoom, the pair were surprised by the announcement and presented with their award by Chair of Selling Parish Council, Andrew Bowles, who praised them for their dedicated efforts to support local residents.

Throughout both lockdowns, and in the face of lengthy periods of enforced pub closure, the couple have helped fellow villagers in a number of ways, including shopping and collecting prescriptions. They have also organised a number of popular online quizzes and over the Christmas period were behind a village-wide Secret Santa event.

They also offered a takeaway meal service, which proved particularly valuable to the more lonely and vulnerable living locally. This ranged from fish and chips and pies to traditional Sunday roasts.

Licensee Karen, who was born and bred in nearby Faversham, said: “We’ve always felt strongly that while The White Lion needs to attract people from outside the area to be viable as a business, as a village pub it is really important to be at the centre of the community, a place that residents can feel is theirs. A place where they will find many forms of support.”

Karen and David have now been at the Shepherd Neame pub for four years, during which time they have grown to both love Selling and play an active role in village life.

“We love living here and feel that during lockdown we just did what friends and neighbours should for each other,” continued Karen. “But we were delighted to receive this award. It is fantastic to know that what we have been doing at The White Lion is so appreciated.”

The White Lion is a traditional village pub offering a range of real ale and quality lagers, good wine and delicious home-cooked food. Just minutes from picturesque Perry Wood, it offers panoramic views of the Kent Downs and is popular with villagers, dog walkers, ramblers, cyclists and horse riders.

Shepherd Neame has been based in the market town of Faversham, Kent for over 300 years. Perhaps best known for great British classic ales such as Spitfire, which carries the Royal Warrant, its diverse portfolio includes Five Grain Lager, Bear Island East Coast Pale Ale and Bear Island Triple Hopped Lager, and the Whitstable Bay Collection. It also brews international lagers under licence including Samuel Adams Boston Lager, and is the sole UK distributor for premium Thai lager Singha. The independent family business boasts an award-winning visitor centre and more than 300 pubs and hotels throughout London and the South East, from the historic heart of the City to the Kent coastline.