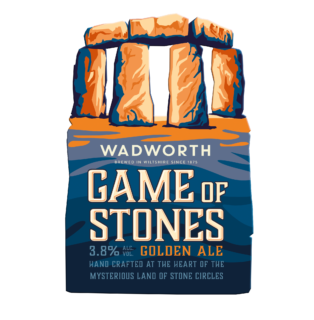 The beer was trialled in a number of pubs in 2018 and has been launched nationally as their summer beer following its success.  A thirst-quenching golden ale, it has an abv of 3.8% and a hidden depth of flavour. Spicy, tangy aromas are met with earthy tones on the palate culminating in a full flavoured beer with a refreshing and clean finish.

CEO for Wadworth, Chris Welham said, “Wadworth Game of Stones is a new summer ale to celebrate the wonderful heritage and natural elements we have here in Wiltshire.  We know the area has a mysterious past and with its iconic stone circles it was only right that we should create a beer to celebrate this history”.

The Wiltshire brewer is located in the heart of the mystical county where Stonehenge and the Avebury stone circles are just a stone’s throw away and the new brew was created to celebrate these roots. Brewed by the team in Devizes using wheat, Pale Ale malt and Caragold it is topped off with Challenger, Cascade and Styrian Goldings hops.  It will be available throughout summer from April 2019.

The pump clip design for Wadworth Game of Stones was created by designers Parr Associates in collaboration with the artist Stephen Millership who created the original image.  The beer’s colour matches the golden rolling hills found throughout county and depicted in the colours of the actual pump clip.

About Wadworth: Wadworth is an independent family brewer and regional pub operator, very proud of its West Country roots. Founded by Henry A Wadworth, the business passed to his founding partner John Smith Bartholomew and is now in the fourth-generation of ownership by the Bartholomew family. Wadworth has created original beers at its brewery in Devizes, Wiltshire since 1875 and is one of the few remaining family brewers to deliver to the local area using shire horses. It also has a 200-strong pub estate and works hard with its business partners and managers to ensure that the pubs offer a warm and welcoming atmosphere, quality food and drink and excellent accommodation to make their customers’ days.