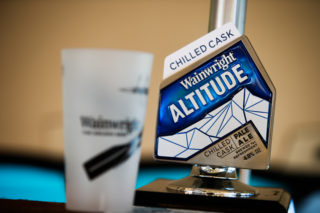 Britain’s fastest growing golden ale Wainwright is planning to launch a chilled cask ale this summer. The beer was previewed at the Boat Race fan park last Sunday to great response from consumers. The Marston’s owned brand which has experienced near double-digit growth for the last three years is determined to stay ahead of the consumer curve with ever changing demands and drinking habits.

Marketing Manager Paul Freeman explained the plans: “There is no secret that cask ale volumes are shrinking and under pressure*, we have been very fortunate with Wainwright in how it has been adopted by drinkers wanting a fresh lighter beer, but that doesn’t mean sit back on your laurels. We have been testing Altitude for a few months now, and this weekend we took the ultimate test by letting consumers preview it in the right environment.

“We all know that the cask category needs innovation and this is why we have taken this step. This isn’t just about ‘cold Wainwright’ – Altitude has been developed with customers at the heart, to bring them a new experience in cask. And the response talking to dozens of drinkers in the Fan Park was fantastic they seemed to love it.”

Wainwright Altitude Chilled Cask is served at 5º degrees and is 4% ABV. It has been developed to meet three key customer points – 1. Cold and refreshing 2. Changing consumer tastes/demands 3. Younger audience.

Chilled cask can bring to the pub the same experience you get from the off-trade purchase – chilled to your liking as craft keg and world lagers are. There is an exciting new audience out there who just need to taste the cask beer that is right for them. In research developing Altitude the development team also identified that current cask drinkers who switch to colder beers and lagers in the summer will find this opportunity new and appealing and that they are hungry for innovation.

The brand also launched another major initiative this weekend in supporting Marston’s environmental commitment by reducing plastic serving cups. The company has committed to eliminate single use plastic cups from all outdoor events its brands attend this summer and in the future. Over 10,000 reusable containers were issued on Sunday, with profits from the sale of the cups going to the Boat Race official charity RNLI.

Wainwright is one of the main sponsors of The Boat Race and has signed a three-year deal as the event’s official beer, it has other innovations launching later this year as part of the brands continued growth plans across the UK.

There will be a controlled roll out of Wainwright Altitude Chilled Cask from June this year, with a plan to be fully available from August across the UK.

Cold Cask is cask ale which, instead of being drawn up straight from the cask into the glass, the beer is run through a lager chiller in order to bring the temperature of the beer down to around 5º (usual cask ale is served at 11-13º). The Wainwright brand best fits with this concept as we know from research it attracts a slightly younger demographic who enjoy the experimentation and refreshment the brand is already famous for.

A perfect thirst quencher unlike other ales; this pale golden cask ale has been specially brewed to taste at its peak when chilled. With a distinctive gentle bitterness to the hops, a refreshing palette of apricot and peach notes delivers a fruity, floral and citrus aroma makes Altitude a new type of cask ale. Go on, discover the peak of refreshment.