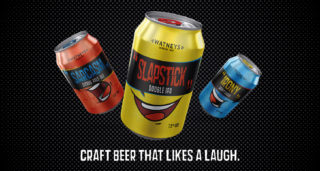 Watneys, once the UK’s biggest selling beer, is back with a difference. The beer, originally brewed in London in 1837, was once synonymous with a cheeky tipple in pubs around the country, especially their (in)famous Watneys Red Barrel. Watneys is now back having reinvented the iconic brand for the tastes of the modern drinker and with a fresh approach to tackle the UK’s craft beer industry.

Since 2015, Watneys Beer Company has enjoyed success in growing its craft beer business (up 85% YOY in 2018) all without owning a brewery, lorry or a barrel. Watneys is now looking for equity crowdfunding on Seedrs (https://www.seedrs.com/watneys-beer-company) to expand its portfolio of strong regional craft beer brands and to build Watneys into a national brand again.

In a competitive craft beer market with over 15% growth but more than 2,000 brewers in the UK, Watneys is taking a different approach to building its business by partnering with award-winning craft brewers to make its beers, instead of investing in costly premises. This allows it to take advantage of wasted capacity in current breweries (which up to 45% of UK breweries hold), whilst minimising Watneys overhead and capital requirements.

Nick Whitehurst, Director of Watneys Beer Company, says: “The nostalgia and history of Watneys give us provenance, but what we’ve done is taken this heritage and reinvented the brand to appeal to a whole new generation of drinkers. Now we’re modern, relevant and have a business model to make Watneys a key brand in the craft beer market.”

Brewed in London since 1837, Watneys is still etched into the architecture of pubs around the country and in the hearts of many. The brand disappeared in the 1980s, but it is setting up to become a great brand once again. It’s inviting the crowd to raise investment to expand the company’s sales & marketing resource to break into additional markets like off-trade and export. The company is also planning to relaunch other cherished heritage beer brands such as Federation in Newcastle, North East England and Matthew Brown from Lancashire, North West England.

Watneys Beer Company is already backed by a group of industry veterans and over 30 angel investors, including East Midlands Business Angels. They’re crowd raising investment on Seedrs, seeking £400,000. You can see the campaign at https://www.seedrs.com/watneys-beer-company

Watneys Beer Company was launched in 2014, to bring heritage beer brands back to the craft market. The old recipes are gone and replaced with new delicious brews for today’s modern drinker. The first iconic brand to relaunch was Home Ales 2015, back into its Midlands heartland. 2016 saw the launch of Watneys in London, once the UK’s biggest beer brand. Watneys is now back and reinvented, with affection with the brand strong and finding fans with the younger generation who love the new, modern Watneys.