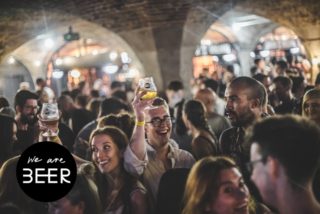 We Are Beer, the team behind the London, Bristol and Edinburgh Craft Beer Festivals, are crowdfunding to launch a weekend-long festival. Held at Ragley Hall in Warwickshire in 2020, Bigfoot will bring together top-notch live music and amazing chefs, on top of the cutting-edge breweries the company are known for.

The festival aims to disrupt the category by being the first to offer revellers real choice, moving away from tied agreements with the beer industry’s biggest players. With community and independence at its heart, it will give people a chance to enjoy the modern, sustainable form of hedonism that characterises the best of UK food and drink culture.

We Are Beer will raise £300,000 to secure the site, book world-famous music acts and assemble the chefs and breweries that will make this a camping festival unlike any other. The campaign has already topped £110,000 in its private round and will go live to the public today, 15 April. As well as receiving a share of all their amazing festivals, investors will get access to VIP tickets, merchandise and a membership programme with exclusive events and offers.

Co-founder Greg Wells says: “Outdoor festivals have always been dominated by bland beer brand tie-ins and average food, and we hope to change that. We want to create a utopia where great music, food and beer is everywhere you turn. We’ve got the perfect escapist location and some exciting acts in the pipeline, but the upfront cost for an event of this scale is huge. With the community spirit we want to create, crowdfunding is the most natural way to secure it.”

On top of launching Bigfoot, We Are Beer have recently announced their fourth UK craft beer festival – Beer Central. Held at 119 in Digbeth, Birmingham, the festival will draw on the amazing craft beer scene in the Midlands. All overfunding money will be put into growing this and the other three festivals, including new locations, more breweries and more immersive experiences such as the new We Are Beer club.

Wells adds: “It’s great to be opening in a new city, and we’ve had ambitions for Birmingham for a while now. If we go into overfunding we have our eyes on some more UK cities as well as abroad – while making our current ones the best in the world.”

Watch the Crowdcube video here, and for more information or to get more quotes, contact Greg (greg@wearebeer.com, 07920 405 546).

About We Are Beer: Founded in 2013 with the first London Craft Beer Festival, We Are Beer produce the best beer festivals in the UK, championing the diversity, creativity and dynamism in this amazing industry while championing great food and music. They now have further festivals in Edinburgh, Bristol and Birmingham – and welcomed over 17,000 beer lovers through their doors in 2018.