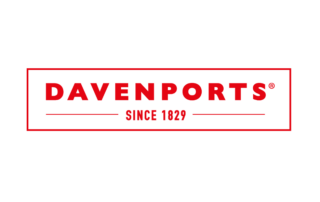 The Guild would like to issue a warm welcome to our newest corporate member, Davenports.

Davenports, the Midlands historic brewing house was established in 1829. Pioneering in its approach to brewing, the company helped place Birmingham on the map, and shaped the brewing industry.

Davenports were also early pioneers of advertising, technology and recycling, in 1905 the company fought and won a famous ‘Beer Hawking’ court case – selling beer by retail at a place where they were not authorised (beer at home). It was viewed as a hugely important prosecution, fought, and won brilliantly by the theatrical barrister, Mr Marshall-Hall K.C, on behalf of Davenports in the Victoria Law Courts. Marshall-Hall was later knighted whilst Davenports had paved the way for other brewers to follow a similar scheme. In 1930, The Birmingham Daily Gazette stressed that few of Davenports’ rivals could claim to be as modern in equipment as Davenports which boasted ‘The very latest appliances that science and mechanics have evolved’. The company turned out 120,000 bottles of beer every day! It was also in the 30s that Davenports championed the recycling of bottles that were returned by customers – ‘scrupulously cleaned and chilled for reuse in two automatic bottle washing machines at the rate of 12,000 per hour’!

Everyone can recall that famous ‘Beer At Home’ jingle that transformed sales in the 70s…fast-forward to 2021, and the company reintroduced that popular Beer At Home service once more.  Davenports is more than an historic brewing house of great ales, it also boasts an ever-expanding portfolio of popular pubs with kitchens, it’s a company that is as relevant and respected today, as it was some 200 years ago!”

The Guild has more than 60 corporate members, among them brewers, pub and restaurant operators, beer distributors,  suppliers to the industry and trade associations. Find a full list of our corporate members on the Guild website. If you are interested in becoming a corporate member, download our brochure here: Guild of Beer Writers corporate membership brochure