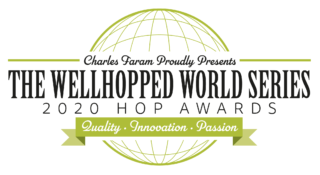 The awards were introduced by Charles Faram, Hop Merchants, in 2019 as a platform for celebrating the expertise and financial commitment that growers around the world bring to the partnership in their Hop Development Programme.

As tastes change, so does the need for new hop flavours and aromas.  There’s a constant demand for that ‘something new’.

Will Rogers, Group Technical Director for Charles Faram said, “Each country is at a different stage of development but all are growing these new plants in an attempt to produce new and exciting varieties to help brewers entice the great beer drinking public to drink more of their delicious products.

We are already extremely grateful to everyone who has grown or brewed with one of our experimental hops and given us feedback about the varieties involved. We are also keen to get more of brewers involved, so please let us know if you can help.”

In this category we are looking for traditional, noble type varieties. These may be replacements or substitutes for other varieties, or they may be new variety which has a delicate aroma profile. Varieties fitting this into this category are Archer, Minstrel and the Faram Fuggle. These samples were all selected from commercial hop samples.

John and his wife Sue farm at Tedney, which is in the beautiful Teme Valley about 12 miles from Worcester.  They have been working together with Charles Faram since 1995 when the farm planted its first hops.  They have 17ha of hops, First Gold, Minstrel®, Archer®, Faram Fuggles and 6ha Organic Sovereign plus organic trial varieties.

In this category we are looking for hops with a balanced aroma profile. They may be citrusy, tropical or herbal and piney but they should be balanced and the aromas bright and clean. Varieties in this category include Mystic and Godiva, but also CF169 (Mozart) and CF182 (Opus) as well as some other CF numbered varieties. These samples were all selected from commercial hop samples.

Mark was last year’s Overall winner.  He and his wife Leslie farm at Bosbury near Ledbury in Herefordshire. The farm has been in the family for 3 generations and grow 30ha of hops including Challenger, Pilgrim, Phoenix, Jester®, Olicana®, Sovereign and Cascade.

He has a large number of the new trial varieties on the farm including Godiva™, Mystic™ and Harlequin™.   Mark has worked closely with Faram’s for over 20 years as did his father before him.

We are looking for bold intense aromas. The aromas should be clean and suitable for hop forward beers, we expect tropical, citrus notes and other aromas associated with New World hops. In this category a little dankness is acceptable, if it balances with the other characteristics. Varieties in this category are Jester®, Olicana®, Harlequin™ and Most. These samples were all selected from commercial hop samples.

Jindra has been involved in hops for over 25 years and has been working in hop research for 10 years.  He is the owner of trading company HOP PRODUCTS and also advisor to the Czech hop growers.  Jindra is engaged in the production of hop seedlings and hop breeding and has been working on the CFD program for 7 years

In this category the sky is the limit. There are varying intensities entered but all are new and unique. As these samples are taken from test plots appearance wasn’t scored. Varieties were only numbered. Samples from the UK, US, Czech Republic, Poland and Slovenia were judged.

Peter is a Research Agronomist began breeding and selecting hops in 2006. In 2009 we set up the breeding program together.  In Summer Peter can be found wandering the nursery from dusk till dawn.

These are only from the varieties we have decided to take further in the programme.

From the top three in each category the judges then went on to select their favourites overall.

As soon as the winning announcement was made, the beer single hopped with our champion hop, brewed by Ledbury Real Ales, was revealed and put up for sale in three pubs in the Hereford and Worcester area.

The winning trophy was created by a local Worcester designer and cast in bronze by a Worcester casting company.  The trophy represents the globe is surrounded by hops and has five leaves on the back to represent each country entered. UK, USA, Poland, Czech Republic, and Slovenia.

SIBA BeerX delegates were invited to try the single hopped Most beer on the Charles Faram stand as well as at the SIBA 40th birthday bar.

1. We’ve been hop suppliers for over 150 years, so we’ve got a lot of hop history.  Charles Faram Hop Merchants and Factors has one of the largest range of hop varieties available from stock in both vacuum packed leaf hops and Type 90 (T90) pellets.

Varieties come from the UK, Belgium, Czech Republic, France, Germany, Poland, Slovenia, New Zealand and the USA. Faram’s provides an artist’s palette of flavours to create every type and style of beer from the traditional varieties to exciting new developmental varieties from Faram’s own breeding and development programme. Our own varieties include Archer®, Godiva™, Harlequin™, Jester®, Minstrel®, Mystic® and Olicana®.each country entered. UK, USA, Poland, Czech Republic, and Slovenia

2. Not just hops – Our locations – Hop history and photos https://www.charlesfaram.co.uk/

3. About the Wellhopped World Series

Both the individual and overall categories are judged on aroma and quality. The overall winner is judged from categories 1-3 on aroma quality and appearance quality.

4. About the Wellhopped Hop Development Programme

The aim of our Hop Development Programme has been to find agronomically sound, exciting new hop varieties that will one day be produced commercially with the help of our own expertise and solid grower relationships.