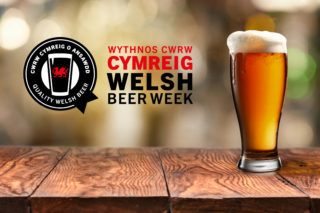 A collaboration between Welsh independent breweries, on-trade retailers and distributors will see the first official Welsh Beer Week launch in pubs across the country on 8 March 2020.

The rise of the Welsh brewing industry can be seen throughout the nation, with a number of craft breweries joining established producers across the country. Increased customer demand for new products that reflect Wales’ culture and heritage has seen brewers respond with an expansive variety of ales and craft beers.

This March, as the Six Nations Rugby Championship drives the nation to pubs and gather around living room TVs, Wales’ brewers are joining forces to offer beer lovers the chance to support the home team at the pump as well as on the pitch.

From Carmarthen to Wrexham, the nation’s pubs are supporting the cause to ensure that beers from Welsh independent brewers will have pride of place at the bar. Those looking to support the country’s brewers simply need to look for beer pumps and taps sporting the official Welsh Beer Week logo.

The backing of key on-trade retailers and distributors across the country will help to ensure that pubs, clubs, bars and restaurants across ales will have access to the widest range of Welsh ales and beer possible.

Speaking on behalf of the Welsh Drinks Cluster Beer & Cider Group, Cen Hayward, one of the organisers of Welsh Beer Week, said: “Wales has a proud history of producing high quality beers and ales. That legacy continues today as young breweries join our oldest brands to create and share those products with the world.

“Welsh Beer Week aims to give beer lovers across the country the chance to experience the true taste of Wales. Our goal is to help people understand the wide range of exceptional Welsh creations available to them today and encourage them to join us in asking more pubs, bars and shops to stock Welsh ales and beer.

“You don’t need to be an aficionado to appreciate the exceptional drinks we produce. Your new favorite pint could well be from a local brewery and we hope Welsh Beer Week helps you find it.”
Organisers aim to have over 1000 beer and ale pumps displaying the Welsh Beer Week brand between 8-14 March. Pam and Russ Honeyman own Monty’s Brewery in Montgomery and have played a key role in making Welsh Beer Week a reality.

Commenting on the official launch, Pam said:
“We believe that Welsh breweries deserve to be recognised for the exceptional quality of their beers and ales. Teams across the country are constantly securing some of the UK industries top awards. This Week is devoted to celebrating Welsh Beer, in Welsh pubs and the people who make it all possible.”

Russ Honeyman added: “We’re very pleased to be part of Welsh Beer Week to help people in Wales to explore the true range of fantastic beers and ales our nation produces. The demand for locally sourced drinks has never been greater and we’re hoping that this Week will allow them to discover that there’s a Welsh beer for every occasion. Whether you prefer a traditional ale, or you’re on a search for something totally new, we’re confident Welsh Beer Week will help you find it.
As well as showcasing products from around the country, Welsh Beer Week aims to help customers discover exceptional breweries that are right on their doorstep.

Sean Murphy is a director at the Vale of Glamorgan Brewery and the managing director of the independent pub group, Knife and Fork. According to Sean, many people will be surprised by the range of craft beer that is available from breweries within their locality.

Sean explained: “Speaking on behalf of a Welsh brewery and an independent pub group I’m probably biased, but I genuinely think it’s fair to say that Wales is producing some of the best beer available from the UK. Young Welsh brewers in particular are showing that they are not afraid to push the boundaries when it comes to creating innovate beers that truly set them apart from the rest.
“It’s clear that customers today are keen to support locally produced products. Welsh Beer Week will give them what they want. Those looking for quality and personality in their choice of beverage will have an array of premium options to choose from.”

In addition to independent pubs, some of the UK’s leading pub chains have supported the campaign to celebrate the nations brewers. That includes Ei Publican Partnerships, the leased and tenanted operation of the UK’s largest pub company, Ei Group, which owns or operates c4,000 pubs across England and Wales.

Nick Light, Managing Director of Ei Publican Partnerships, said: “With over 100 pubs within our Ei Publican Partnerships estate located in Wales, we are very proud to support Welsh Beer Week to enhance the profile and knowledge of locally brewed beer. The drinks sector in Wales comprises many innovative producers and we want to be a part of its growth”.

Welsh Beer Week will officially launch across the country on 8 March and will run until 14 March to coincide with the final matches of the Six Nations Rugby Championship, which will see Wales face Scotland at the Principality Stadium. Those looking to discover Welsh beers and ales just need to look for taps and pumps at the bar sporting the official Welsh Beer Week logo.