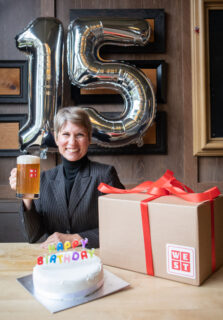 When WEST threw open its doors to Glasgow on the 10th of March 2006 few would have guessed the Glasgow Green venue would one day become a vital part of the city’s hospitality scene. Originally conceived as a nod to an authentic Bavarian beerhall with attached microbrewery, today WEST is home to two production breweries as well as a unique and airy dog and child friendly restaurant and bar with arguably Glasgow’s best beer garden.

WEST has been brewing in accordance with the German Purity Law (the Reinheitsgebot which dates from 1516) since its inception and in 2016 added a dedicated events space “the Courtyard”, an internal events area which has seen WEST play host to many memorable events. The same year it also opened its second production brewery which increased brewing capacity tenfold and has allowed the brewery to supply over a thousand pubs, bars and restaurant UK wide with draught lagers, ales and wheat beers.

WEST is now getting set to celebrate its 15th Birthday by launching The WEST Brewery Birthday Box – a beerhall dining and beer experience for two. And, if you want to join the fun early, they are celebrating on March 10th with a Facebook Live, beer tasting event.

WEST Brewery founder Petra Wetzel explains, “The Beerhall Birthday Box is an authentic Bavarian beerhall dining experience with four classic German dishes – available as a meat, a vegetarian and a vegan option, all accompanied with six of WEST’s top vegan beers. And what makes it special is that £5 from every box go to our local food bank.

“The WEST team racked their brains on how to safely celebrate a big milestone birthday with an appropriate celebration during a pandemic lockdown so executive chef Joanne Munro and head brewer, Simon Roberts put their heads together and came up with The WEST Brewery Birthday Box Beerhall Experience for two!

“1 in 4 children in Glasgow go to bed hungry and 1 in 5 households are living below the poverty line. Our beloved Hospitality industry has been decimated during the lockdown which has put many businesses at the brink of collapse, however we are well aware that many families do not even qualify for the government’s furlough scheme and are struggling on Universal Credit. We therefore wanted to make sure that our Birthday Box celebrations also provide food for many in our immediate neighbourhood. That is why £5 from the price of every Birthday Box will go to the Glasgow North East Food Bank in the Calton.”

John McCusker, a volunteer driver for the Glasgow North East Food Bank which opened in 2013 in The Calton and which delivers food parcels in the North East area, was keen to explain “This is very generous and it will certainly help many in need. Last year we fed 5,000 families and this year, even more. It might sound a wee bit cheeky, but if WEST customers who are coming to collect their Birthday Boxes, could maybe bring down a food bank food donation and leave it with WEST… that would be really magic!”

Executive chef, Joanne Munro said, “ It was quite a challenge to pair four great German dishes with our award-winning beers and ensure the beer suits a meat however I am really delighted with the results. I wanted to make sure that everyone could manage the easy to follow instructions for each of the four delicious dishes at home and enjoy the online Beer Tasting with Simon’s chosen beers. Our founder Petra, who is not renowned for her cooking skills, trialled the Vegetarian box for us last week and if she can follow my instructions, anyone can!”

Head brewer, Simon Roberts chose six beers to make sure that there was a diverse range to enjoy. He explains “This line up illustrates the story of WEST. Over these six beers we demonstrate malt, hops and yeast influences. We have beers from our core, discovery and experimental ranges. We have the beer that has been here since day one, the first release in our WESTwerk range and our most recent release. In short we have six beers that we are proud of, that offer discussion points and obvious sensory differences for the tasting itself and with this line up we can show how proud we are and really celebrate our development!”

Petra reflects “In all my years, I never envisaged celebrating a milestone birthday in a pandemic and I know that we will bounce back once the lockdown restrictions allow us to. I cannot tell you how much I am looking forward to welcoming our customers back and that’s why we thought of another birthday celebration –  The Golden Ticket!  As a special surprise, one of our Birthday Boxes will have a Golden Ticket which is a brewery tour and dinner for four!

If you would like to join WEST Brewery’s birthday celebration and purchase The West Brewery Birthday Box Beerhall Experience for two just click here or go to https://www.westbeer.com/clickdeliver/ and then click “Collection” or “Delivery” (Delivery is within a 7 mile radius of WEST Brewery).The Birthday Box is priced at £65 with the option to add on extra beers and a wee dram. The vegetarian and vegan boxes start at £60.

You can order from today and last orders will be @ 15.00 hrs on Wednesday, 10th of March! Delivery & collections from WEST on the Green are available on Friday 12th and Saturday 13th March.

For those of you further away, you can join in the fun on March 10th with your very own Beer Tasting kit. It features 5 beers, a half pint WEST tankard and 15% off discount code that can be used for the online shop to the end on April 2021. You can order your Tasting kit now from https://shop.westbeer.com/beer2.html

The Facebook Live event starts @ 19.30 hrs on Wednesday, March 10 and anyone can join in!

For our meat eaters!

This is where it all began. Our flagship lager was conceived to be a stalwart of our beer hall and a beer of which Glasgow could be proud, which is why it is named after our patron saint. We are extremely happy as we feel we have succeeded, and St. Mungo is a well-loved Glaswegian product.

St. Mungo is a Helles, a pale style of lager of German origins, synonymous with Bavaria. This beer is all about approachability, drinkability, and balance. It features two malt barley varieties (Extra Pale and Light Munich), as well as Perle, Tettnang and Tradition hops. Essentially St. Mungo is a flavoursome lager that draws character from each of its ingredients whilst not allowing any to dominate. The hop bitterness is tempered by the malt sweetness and both are complimented by the grassy, spicy and herbaceous hop aromas.

A pale ale showcasing a balance between old world classic German hops and new world American hops.  This could be described as our first foray into what would now be known as the craft beer segment. It was certainly our first hop forward beer in the core range. This beer started out life as a one off seasonal Kolsch, the beer of Cologne, but with some American hops added by the Head Brewer who conceived it, who was from New England. The beer was popular and continued to evolve over subsequent brews until it is what we now love as GPA, or German Pale Ale.

While still maintaining the balance and drinkabilty that we believe underpins the intent of all our beers, this core product is more of a hop show case. While malted wheat adds body and helps maintain a white pillowy head and Light Munich Malt adds a light biscuity flavour, it is the impact of the hops that are most noticeable. Chinook at the start of the boil gives us an assertive bitterness, while the late addition adds bold citrus flavours. Finally, an addition of Hallertau Mittelfruh brings a floral aroma.

This cloudy Bavarian style wheat beer is packed full of fruity flavours. Heidi-Weisse, named after the original brewery dog, is another beer in our core range that is strongly associated with the German province of Bavaria. It is a Hefeweizen or unfiltered wheat beer. These beers are distinctive in their pale and cloudy appearance and, according to the German Purity Law, the grain bill must be at least 50% malted wheat.

Heidi, like all German Weizens, really demonstrates what yeast can bring to beer beyond ethanol and carbonation. This beer is rammed with banana like aromas which are all created by our wheat beer yeast and careful manipulation of a warm fermentation. You should also be able to pick up background hints of whole clove. Only one hop addition of Perle hops is used to give enough bitterness to balance the beer. Throughout all our years, this has always been “the staff favourite.”

A perfect sessionable lager that showcases the white wine flavours of the hop Hallertau Blanc.

Originally devised for an alcoholic drinks publication, the idea was to demonstrate how a German Purity beer could buck some misconceptions and we chose to do this by showcasing flavours not usually associated with German beer. As the beer was originally intended to launch with the publication’s issue on wine, it was suggested we make an IPA with white wine flavours. Petra said no, everyone is making IPA, so let’s make a pilsner, and the Head Brewer knew just the new and exciting hop for the job.

Feierabend (to celebrate the end of the working day) is a Pilsner, a slightly more bitter style of lager. This beer is a great food accompaniment and perfect in spring and summer. The Hallertau Blanc hop creates flavours of white grape, elderflower and gooseberry. These flavours, along with a dry finish, give us a refreshing beer that is reminiscent of sparkling white wines.

A citrusy ale that was created to pair with Glenfiddich IPA Cask. The name Hoffenhawf sets out the stall. This is half of a set, the other hawf is, ideally, Glenfiddich IPA Cask. The beer was created in 2020 by a committee made up by WEST, Glenfiddich and nine of Scotland’s most iconic whisky bars. Over two days Hoffenhawf was conceived, designed and brewed. It was a wonderfully collaborative and friend building endeavour just before the world closed down. It is a flavoursome beer and a reminder of what we can do when we get our heads together.

We styled this as an unfiltered copper ale as, visually, the beer is intended to remind you of a copper still working away in the Spey Valley. The beer is bitter enough to cleanse the palette before each sip of whisky but not bold enough to dominate. The malt biscuit flavours create an excellent base to hold the citrus hop aromas that are intended to bring orangey notes from the whisky to the fore.

A heavy hitting tart, barrel aged doppelbock. This is the first release in our sub-category brand, WESTwerk. WESTwerk is an ongoing range of one-off releases where we can be more bold, experimental and off-piste than we would normally be thought of. This is where we can demonstrate more modern flavours and the extreme possibilities of the German Purity Law.

This beer started off life as a weizen doppelbock or doubly strong wheat beer. It then spent time in Lowland whisky casks where the beer underwent drastic transformation. This is a beer that is closer to port or sherry in profile than the golden lagers that we are known for. Drink this beer slowly, ideally with a large cheese board or indulgent desert.

Contact weelynn@weepartnership.co.uk on 07967804257 and credit Elaine Livingstone for photos