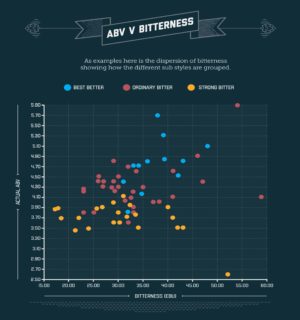 What makes a beer style and who defines its features? Questions we often ask when judging beers in competitions as entries continually push the boundaries. To provide some answers Brewlab has conducted research analysing how beer styles differ and have summarized their findings in an infographic report, now available from www.brewlab.co.uk/news/brewlab-beer-styles-report-infographic–

To form the basis of the research Brewlab analysed 1538 beers from their customers since 1994 and anonymously collated the data to summarise their style features. Measuring ABV and its associated measures of original gravity and final gravity, pH, colour and bitterness.

This is part of an on-going project assessing beer styles over the past 20 years. If breweries produce beers to a style they need an indication of boundaries and overlaps – eg between a porter and a stout. Trading standards require label claims to be accurate so defining styles provides that guidance. Our previous study was reported in the British Food Journal (Vol 108 2006) and we will report a further extensive analysis in the near future.

From the results it was interesting to see that the features of many styles remained similar to the parameters summarized in 2006. However, when considered overall some differences are evident. Average alcohol levels are down by 3% on average. This did vary by style and was mainly due to old ales being weaker. More extensive differences are evident in beer colour and bitterness. While bitterness overall has increased by 5% colour has decreased by 18%. This is particularly evident in the darker beers – milds, porters and stouts. In general, it appears that beers are becoming lighter but more bitter.

It was particularly interesting to see that standard beers are retaining their character but also that darker beers appear to be evolving. The introduction of blond and golden beers has had an impact on the market and possibly influenced changes in other styles. We are keen to look in more detail at the time scale of these changes and will be doing this in the near future. It will be particularly interesting to see how style character changes over time and to plot the development of new and evolving styles.  We have also analysed a range of beers without a declared style and will look to see whether these have distinctive features.

To keep in touch with Brewlab’s activities on this and other researches, please visit www.brewlab.co.uk/news

If you would like more information on the results or infographic images we are more than happy to discuss the findings further.