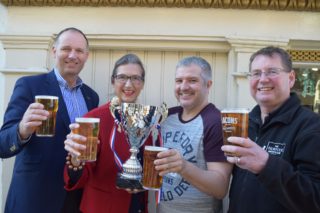 Despite the last century’s closure of the county’s iconic breweries, Norfolk has well and truly bounced back. There are now 44 breweries in the county, and a further 27 in neighbouring Suffolk.

A spate of recent awards has confirmed the status of the region as one of the nation’s top beer locales.

Brian Finnerty of the National Farmers’ Union, East Anglia said: “The best beers require the best ingredients and we are right in the heart of the best barley-growing region in the world. That’s where the beer supply chain starts.”

“The East of England remains a centre for this crucial crop, thanks to its combination of soil composition, climate and farming expertise. This ensures that barley grown here meets the exacting standards of maltsters such as Crisp.”

Much of the barley malted by Crisp is on the company’s historic floor maltings. The malt is then used by the region’s brewers to produce exceptional beers.

Adrian Dyter, managing director of Crisp says, “The 200 plus farmers who supply us are – literally and figuratively – true experts in their fields. The quality of grain they produce allows us to create exceptional malts. In the hands of skilled craft brewers, these result in beers packed with flavour and character.

“We are so very lucky to have City of Ale to showcase the amazing beers brewed in the area. The ten-day celebration has had a big impact over the years, inspiring many other city-wide beer festivals, and earning well-deserved recognition for Dawn and Phil. They were the first to create a city-wide beer festival back in 2011 – and the event has gone from strength to strength.”

All of the recent award-winners will be at the City of Ale launch on Thursday 23rd May celebrating the excellent ales that they have – in some measure – helped to bring to pub-goers. City of Ale runs from 23rd May to 2nd June, with nearly 50 pubs taking part, running events, being part of the Ale Trails, and serving the region’s fabulous beers.