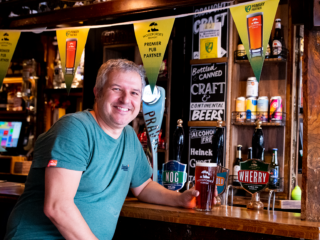 Phil Cutter, Landlord of The Murderers

The Murderers, The Jubilee, Queen Of Iceni, Lollards Pit and Compleat Angler will become go-to destinations for Canaries fans this season. Woodforde’s drinkers will have the chance to win tickets for Premier League matches on the day, while the pubs will also host fan events and special appearances guaranteed to prove popular with City fans. All pubs will have bespoke point of sale to celebrate their partnership with Norfolk’s biggest brewery.

The pubs will host pre- and post-match activities centred around City matches, with Woodforde’s drinkers being given the chance to win tickets in draws before selected matches. The first promotion will take place this weekend, on Saturday 5th October, when everybody who orders a pint of Woodforde’s at The Murderers, on Timber Hill, will be entered into a prize draw for the chance to win tickets to watch Norwich vs Aston Villa at Carrow Road that day.

As a result of Woodforde’s partnership with the club’s number one fan channel, Talk Norwich City, live podcast recordings will take place in participating pubs, while club legends will also make appearances throughout the season, much to the delight of fans.

James Armitage, Commercial and Marketing Director, Woodforde’s Brewery, said: “We’re proud to be a primary partner of Norwich City, and everybody is excited to have the club back in the top flight. Our Premier Pub Partners will be the place to be for City fans this season, with unmissable experiences, the chance to win tickets before matches, and of course great Woodforde’s beer on offer.”

As a proud partner of Norwich City, Woodforde’s well-loved beers, Wherry, West Coast Wherry and Norada, are available at Carrow Road on matchdays, and as sponsors of the stadium’s Barclay Stand, Woodforde’s branding will be visible to millions of fans worldwide. Match-goers have also been able to get their hands on a pint of Woodforde’s outside Carrow Road this season, with the Woodforde’s Fire Truck dispensing pints to thirsty fans before games.

Following this weekend’s activity at The Murderers, fans should keep an eye out on social media @WoodfordesBeer and @TalkNorwichCity for more information about special events.