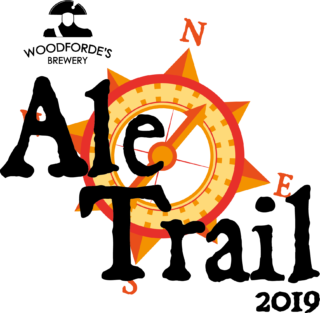 Woodforde’s Brewery is raising a glass to celebrate its most successful Ale Trail yet. As it enters its final weekend, 750,000 pints of Woodforde’s beers have been sold at participating pubs in East Anglia’s largest ale trail.

Run in partnership with more than 400 pubs across Norfolk, Suffolk, Essex, Cambridgeshire and Hertfordshire, the Woodforde’s Ale Trail offered people the chance to collect stickers each time they ordered a pint of Woodforde’s in a different participating pub. All summer, Ale Trailers have been collecting their stickers, and have been redeeming their special prizes, including beers and limited-edition merchandise, from the Woodforde’s Brewery Shop in Woodbastwick.

James Armitage, Commercial and Marketing Director, Woodforde’s Brewery, said: “It’s been great to see so many loyal Woodforde’s drinkers visit our customers’ pubs this summer. Pubs from the North Norfolk Coast to the Cambridgeshire countryside have got involved, and we’re delighted to have been able to support them through the Ale Trail.”

The award-winning brewer has been running the Ale Trail for more than twenty years, and this year ranks as the most successful yet, in terms of pints sold. The whole Woodforde’s range was included in the Ale Trail, including its new keg beers West Coast Wherry, Conquest Lager and Norada Pale Ale as well as classics such as the iconic Wherry, ensuring there’s a beer for everyone on the Ale Trail.

Billy Barnes, Manager of The Lollards Pit, Norwich, said: “The Woodforde’s Ale Trail is crucial to us, it drives in new people to the pub looking for their stickers. We always keep Woodforde’s on anyway but we have had a lot of people ask for the lager Conquest this year too.”

The Woodforde’s Ale Trail runs until Sunday 29th September. For the full list of participating pubs, visit www.woodfordes.com/ale-trail. You can keep up to date with Woodforde’s Brewery by following @WoodfordesBeer on Facebook, Twitter and Instagram, or at woodfordes.com