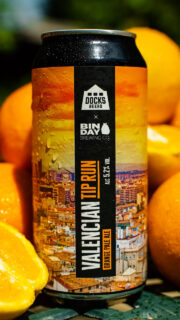 The company, created by YouTuber and podcaster Robbie Knox and former BBC presenter Mike Millar, was launched just one month ago and is named after one of Robbie’s kids’ favourite activities – taking the bins out.

It aims to become an integral part of the YouTube community, working with creators and viewers to make great drinks and great content.

BDBC is quickly building a community based on a strategy of complete transparency, with the team sharing their results and lessons online with their followers.

The company’s YouTube channel, where the team has started documenting their journey, is already the second biggest craft beer channel in the UK, behind Brew Dog – and has more subscribers than much bigger drinks rivals like Carling.

Robbie and Mike launched Valencian Tip Run (VTR), an orange pale ale, in collaboration with Grimsby’s Docks Beers, using just its social media channels and not a penny of advertising.

A ‘Meet the Brewer’ launch event sold out in 12 hours and people drove up to four hours (an eight hour round trip!) to meet the team and taste the beers.

Three days later all 5,000 cans of VTR were gone. This made it the fastest selling collaboration ever for Docks, and put it just behind sales of their own Clap Clap Clap Clap Clap Clap Fish beer, which pays homage to local football team, Grimsby Town.

‘The success of Valencian Tip Run just goes to show that people shouldn’t be put off starting a business just because they’re vastly under qualified. We didn’t know anything going into this about brewing beer on a commercial scale, but by sharing the journey with the audience we can all learn together.

‘Docks have been great partners for our first brew, and we’ve learnt so much from them about the industry.’

‘Valencian Tip Run orders started flying like the proverbial hitting the fan almost as soon Bin Day emailed their subscriber list. We knew it would sell fast but we have been been slightly discombobulated by the speed it sold out.  Some might say this is beginner’s luck, but we don’t think so.

‘Bin Day has absolutely given a masterclass in getting their customers to engage with their story via YouTube long before the beer even went on sale and we strongly suspect this will be only the first of many smash hits for Robbie and Mike.’

‘People want openness and authenticity from companies these days and we took that idea and applied it to craft brewing which is not always the greatest at engaging with a wide audience.’

Robbie and Mike documented and broadcast their efforts to make beer during the pandemic, from Robbie’s kitchen. They did this after their businesses, video production and marketing consultancy respectively, ground to a halt in 2020.

The videos garnered thousands of views, followed by an approach from Docks to do a collaboration.

The Bin Day team visited Docks Beers several times to assist with the recipe design, pilot brew and commercial brewing, and to get advice from the Docks brewing team – all the time documenting their activities and building a sizeable social media community.

All their visits have been documented on video and the entire process has been uploaded to YouTube.

The beer was launched one day shy of a year after the first beer was brewed in Robbie’s kitchen.