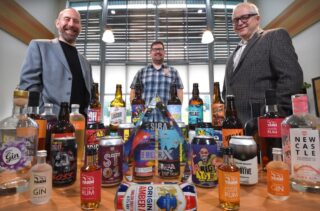 Raise a glass to a tiny Newton Aycliffe design agency in County Durham who have just gone global with their world-class creative campaigns!

LemonTop Creative has quickly made a name for itself in the drinks industry and now works with major clients across the Far East and Europe, as well as breweries, distilleries,  and industries closer to home.

The LemonTop team now works with T Warriors brewery in China, Lairgforest in Hong Kong,  KHS in Germany who supply the biggest breweries in the world, and Au P’tit Brasseur D’Argentonnay, a craft brewery in France.

That’s in addition to creating websites, branding, digital and point of sale material for Quantock Brewery in Somerset, 4ts Brewery in Warrington and the Molson Coors brand as well as George Samuel Brewery, Castle Eden Brewery, and The Herbal Gin Company closer to home.

LemonTop Creative is also a proud “Supplier Associate of the Year” SIBA Award winner which recognises excellence in the brewing industry from can and bottle design, to efforts taken by associates to make their business more eco-friendly and supporting local communities.

So it’s “cheers” all the way for the three Directors as LemonTop Creative becomes the “go-to” agency within the national (and now international) brewery and drinks world.

Creative Director Arron Stoutt explains how it happened: “Steve Gill and I had worked together on successful creative campaigns including Sainsburys and Franks Flooring for many years but LemonTop’s  dominance in the drinks sector came about almost by chance. Fellow director Andy Mogg happened to have a lifelong passion for craft beer and had written on the subject extensively. He had friends in the brewing world, and together we took on a couple of branding and website projects for microbreweries.  Once larger players in the market saw the finished creative work they immediately wanted something similar and it grew from there.”

LemonTop also works with The Co-op nationally and recently created the new website for the high profile “Port of Middlesbrough”.

So what’s the secret of the trio’s creative success? Director Steve Gill says: “Putting it simply, we try to build a bridge from where brands are, to where they want to be. We make sure we have a very detailed brief, get right under the skin of an organisation, look far beyond the logo and always ensure a brand will stand the test of time.”

So the next time you’re in your local, take a closer look at the labels – they’re probably LemonTop’s.