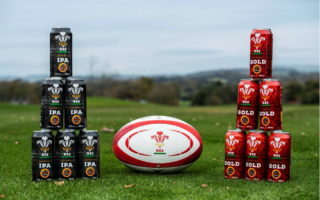 The new WRU Gold and WRU IPA are available this week from a range of retail outlets for supporters to sample in time for Wales’ much anticipated return to international rugby, against France on Saturday 24th October.

Brecon Brewing has also acquired exclusive ale pourage rights to Principality Stadium until 2023 as part of this new partnership and the artisan brewers will soon be busy stocking concourse bars and hospitality areas with these new beers, in time for the equally eagerly awaited return to the Six Nations.

The WRU IPA is a 5% pale golden IPA, bursting with Citrus and Resinous aromas, with hints of spice and black pepper and WRU Gold is a 4% easy drinking Welsh Golden Ale, beautifully balanced with a floral citrus aroma and hints of tropical fruit – both are available now at shops including Spar, Nisa and Filco and Castel Howell serviced stores, in 4-can launch packs.

“To be in a position to announce a new partnership deal during these difficult times  for our national game world-wide shows the innate value and strength of the Welsh rugby brand and is a credit to our Commercial Team,” said WRU CEO Steve Phillips.

“We are delighted to welcome Brecon Brewing to the Welsh rugby stable as our official ale partner and particularly pleased with the agreement to produce two new artisan WRU beers.

“The WRU is a not-for-profit organisation with all of our earnings re-invested back into the game at all levels.

“Supporters will now be able to toast their rugby heroes on the pitch and know that with each drink they take, they are directly supporting Welsh rugby including our national and regional teams and, more importantly, also the clubs who are the lifeblood of our game.”

Draught beer in casks and kegs is available direct from Brecon Brewing at www.breconbrewing.co.uk/wru and it is the ambition to service rugby clubs and pubs throughout the country so that the nation can drink a toast to and directly support Wales each time they play.

“Brewed with Welsh water, UK malts and UK hops WRU Gold is the perfect home beer for all home matches!” said Buster Grant, Brecon Brewing’s Head Brewer, which was founded in 2011 and quickly established a reputation as one of Wales’ best known breweries.

“And our WRU IPA has a moderate, balanced bitterness which makes it a very drinkable, special beer and one to savour with the Welsh victories.

“We’re really proud to be working with the WRU for these two exclusive beers, and very excited to create something unique amongst World rugby, whereby the sales of beers to supporters feeds a virtuous circle which helps promote rugby at all levels across Wales.

“We’re hoping that Welsh supporters and Welsh rugby clubs will get behind these beers and therefore support the WRU.”

The WRU/Brecon Brewing partnership allows for the two new beers to be marketed throughout the United Kingdom and Ireland as well as the ability to export licenced beers on a worldwide basis.

Cases are also available to consumers via mail order direct from the brewery, it’s website www.breconbrewing.co.uk/wru, although quantities may be limited as a result of COVID restrictions.