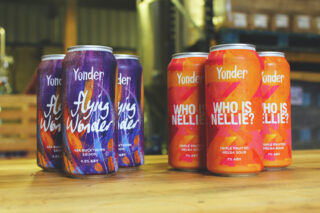 Yonder Brewing & Blending, the modern farmhouse brewery based in Somerset’s Mendip Hills, is launching two limited edition seasonal beers, available now, nationwide*. Like the rest of the range, the new beers use locally foraged ingredients, which showcase the incredible variety of flavours available on its doorstep while also minimising food miles.

Flying Wonder is a saison-style beer brewed with foraged sea buckthorn berries from the coast near Weston-Super-Mare, just down the road from the brewery. With an abv of 4.9% the beer has a tart citrus taste from the vitamin C-packed berries, on top of a dry and refreshing base beer, with spice-like flavours from an un-tamed fermentation. The name Flying Wonder is inspired by the Greek mythology of Pegasus, the white-winged horse. Legend had it that he would graze on sea buckthorn berries and that it was these bright, tart little fruits that enabled him to fly around ancient Greece and Mount Olympus.

Who is Nellie? is a 7% abv, full-bodied, triple-fruited melba sour beer which is packed with decadent quantities of apricot, peach, raspberry and vanilla. It is peachy orange in colour, vegan and lactose-free. Who is Nellie? is named after Nellie Melba, the Australian opera singer who became one of the most famous singers of the early 20th Century. She took the pseudonym Melba from Melbourne, her home town.

Stuart Winstone, Founder of Yonder Brewing & Blending, says: “We are delighted to be launching our two new limited-edition beers, both of which use locally foraged ingredients from close to our modern farmhouse Somerset brewery. The beers represent our approach to brewing – celebrating local flavours and experimenting with amazing yeasts and microflora, while producing perfectly balanced and moreish beer.

“By brewing with the very best of local ingredients and alternative techniques that combine historic styles and modern brewing technology, our approach to mixed fermentation and barrel ageing puts the emphasis on balance of flavour and drinkability. Minimal intervention is the key to ensuring that there’s a little bit of nature in every sip.”

Yonder’s core range of beer is available in 440ml cans and comprises: its flagship Raspberry Gose, an extremely popular sour fruited beer with an abv of 4% abv; Acapella, a heavyweight pilsner with an abv of 5.5%; Sub Culture, a 4.5% abv mixed fermentation dry-hopped pale ale, Coolbox, a 3.5% abv session helles beer, and Boogie, a 3.8% abv modern bitter.

Yonder Beer & Brewing was founded in 2018 by Jasper Tupman and Stuart Winstone, who share a passion for foraging, fermentation and flavour.
Jasper and Stuart invested everything they had to build their unique vision of carefully crafted beers with a strong sense of place. Later joined by Dave Williams as Head Brewer and Lee Calnan as Sales Director, 2020 marked the next phase of development for a small team with big ambitions: to bring innovative, modern farmhouse brewing to a wider audience in the UK and beyond.

*The beers are available from the brewery online shop www.brewyonder.co.uk/collections/all as well as from independent bottle shops across the UK.

For further information or imagery please contact jogrobel@exactpr.co.uk or 07881 782262