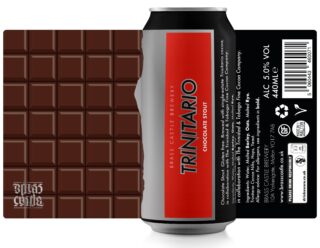 ONE of Yorkshire’s most creative breweries has teamed up with a Caribbean cocoa producer more than 4,000 miles away, to produce a unique chocolate beer.

Brass Castle Brewery in Malton, North Yorkshire, has collaborated with the Trinidad & Tobago Fine Cocoa Company to launch Trinitario, combining Yorkshire ingenuity and some of the finest cocoa in the world.

Whereas most chocolate beers in the UK are flavoured with lactose, vanilla, and chocolate essences, Trinitario’s flavour will come entirely from the cocoa, with the nibs being steeped during fermentation and conditioning. Brass Castle has also made use of the cocoa bean ‘shells’ or husks, by adding them into the mash.  Cocoa shells are usually discarded for chocolate-making but also have a strong cocoa character.

The Trinitario cocoa variety originated in Trinidad around 1678 before spreading to a number of other chocolate-growing states around the globe.  It is used for its floral, fruity characteristics in the finest chocolates available today.

Phil Saltonstall, owner of Brass Castle, developed the connection with Ashley Parasram, of Trinidad & Tobago Fine Cocoa, and hopes the link will help both companies and consumers in both countries.

Mr Saltonstall said: “Beer is one of the most popular drinks on the planet, across very many countries, and it brings people together. We call it ‘beerplomacy’ – developing international links and relationships through the common language of beer. Doing that over longer distances and bringing together ingredients from shore to shore makes for interesting and fun collaborations.  We’re able to use our brewing expertise to get something unique and special out of these wonderful ingredients.”

“In many ways, beer and chocolate is an obvious pairing.  Like beer, cocoa beans go through a fermentation process to prepare them for conversion into chocolate.  As brewers, we can combine various malt types to develop a very basic chocolate character in beer already – so the flavours really are complementary.  Many breweries make chocolate beers, but there is something special about Trinitario cocoa and we wanted to use it to make a really special beer.

“Besides light lagers, sweet stouts are staple Caribbean beer fare.  In Trinitario, we have made a beer that is recognisably Caribbean in its sweetness, using fine local ingredients.  Trinidad and Tobago has always been associated with very high-grade chocolate.  The country’s output of cocoa has reduced as the economy changed, but Ashley is working to rebuild some of that production and protect the cocoa’s international reputation.”

“We know that Malton produces some of the best beer in the UK, and Ashley is producing some of the finest cocoa in the Caribbean, so this is a really exciting partnership.”

Mr Saltonstall and Mr Parasram met through Mr Saltonstall’s wife, Harriet Cross, who is UK High Commissioner to Trinidad and Tobago. During her previous role, as High Commissioner to New England, Brass Castle forged strong links with American breweries, leading to collaborations and new import-export arrangements, introducing new beers to drinkers on both sides of the Atlantic.

Mr Parasram runs Trinidad & Tobago Fine Cocoa from a facility in the Trinidad Cocoa Research Station and is a great evangelist for the quality of the Trinitario crop.  The business operates as a public-private partnership, enabling small producers on the islands to collaborate to reach new markets, while showcasing the depth of flavour in Trinidad and Tobago’s indigenous cocoa.

Mr Parasram said: “Trinitario means origin of Trinidad & Tobago. It is a genetically unique type of cocoa only found here and brings together the terroir of the soil and the tropical climatic conditions for a fruity, floral flavour. Although our Trinitario cocoa has been used by some of the best chefs in the world for chocolate desserts, the Brass Castle Brewery chocolate stout will add a new chapter to our national cocoa story”.

Brass Castle will sell the beer in 440ml cans through its usual UK markets. It intends to ship some to Trinidad and hopefully recreate the beer there in partnership with a local brewery.

For more information, or to arrange photographs or broadcast interviews, email gavinaitchison@hotmail.com