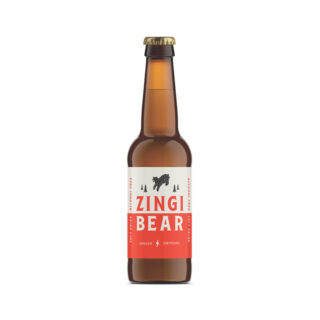 Zingi Bear (www.zingibear.com) is a Great Taste Award winning, flavour focused soft drink company based in the Lake District, producing refreshing & rejuvenating apple cider vinegar elixirs called switchels. Inspired by a historic recipe of sparkling water and fresh root ginger, sweetened with organic acacia honey and pepped up with apple cider vinegar, each alcohol-free soft drink is made in small batches with the finest natural and organic ingredients. The tart and effervescent switchel is a thirst-quenching elixir by day, a grown-up alternative to alcohol and a sophisticated mixer by night.

Zingi Bear sparkling switchel first gives you a lift from pressed ginger root, which is mellowed by acacia honey and rounded off with the zing of Sicilian lemon juice and apple cider vinegar; best enjoyed straight from the bottle, or over ice with sliced fresh ginger and a wedge of lemon. If you are so inclined, mix it up as part of a Moscow Mule (mixed with vodka and a little lime) or why not try a Dirty Switchel (a revival of an old-school cocktail, mix with a vanilla-led spiced rum and a wedge of lime).

From the Great Taste Awards judges, who awarded Zingi Bear Switchel with two stars, “This delicately coloured switchel is really appealing, in its colour, level of carbonation and mild gingery apple aroma. It’s clean, bright and refreshing. It cleverly brings little bursts of different flavours, all of them working together to make a rounded and fabulous drink, that matches sweetness and acidity beautifully. The ginger is carefully balanced to bring a slight element of heat whilst the apple and honey add crispness and sweetness without mutual obliteration. Really delicious and very moreish…well done!”

From renowned Michelin-starred chef, Simon Rogan, “At L’Enclume, we use the very best ingredients to create the very best dishes. Zingi Bear is doing just that with their drinks, that’s why we have supported them since the very beginning, and why they continue to sell well across our restaurants. It’s important that our drinks menu can stand up to what’s on the plate, and that’s just as important for our alcohol-free options as it is with our wines and spirits. Zingi Bear is made with care, with exacting ingredients, it’s a drink that pops with the food on our plates.”

Founder Laurie Freeman is an absolute flavour fiend, a trained cheesemaker and brewer, he is obsessed with great tasting food and drink. Laurie found the soft drink market lacking in flavourful, grown-up drinks that could measure up to a craft beer or a well-crafted cocktail for those looking to drink less. A big believer in organic farming and quality over quantity, Laurie set about creating something that tastes great, is better for you and made using genuinely fantastic ingredients. It was also important to Laurie that his drink had all of the premium look and fun feel of a craft beer, so those looking to abstain from drinking would no longer feel they’re missing out. After collecting plastic washed up on his local beach, sustainability is also at the heart of Zingi Bear, which is bottled in (endlessly recyclable) glass, adorned by paper, rather than plastic, labels.

After much tinkering, Zingi Bear, whose name is a play on the Latin for ginger (zingiber), was born, based on a traditional drink called a switchel, a refreshing and rejuvenating apple cider vinegar & ginger thirst-quencher. This punchy style of drink was popular in America in the 1700s, where it was drunk by thirsty farmers as a hydrating drink whilst cutting hay in the searing sun, and again after-hours as a perfect pairing for harder drinks at the end of a long slog.

Zingi Bear is available now from zingibear.com, top local independents and Michelin starred restaurants (notably across Simon Rogan’s restaurants and retail, Daylesford Organic’s Wild Rabbit and their outlets around the UK), priced at an RRP of £3.50 per 330ml bottle.

Laurie Freeman started Zingi Bear after winning a place on the ‘Young Innovators’ competition with Innovate UK and the Prince’s Trust, aimed at helping young people get going in business. Laurie says, “I thought that soft drinks needed to up their game; whilst cutting down on drinking, I was often not able to find a good quality alternative that had the feel of a craft beer brand – so I started playing with the best natural ingredients to create something special. Whilst having a lot of fun experimenting, fermenting, blending and brewing, I discovered an old-school style of drink called a ‘switchel’ – a super thirst-quenching beverage, once drunk by thirsty farmers as an elixir by day, and then as a mixer for spirits by night. All the flavours sat so well together – a zing from the apple cider vinegar, backed-up by ginger and lemon, then rounded out with honey. This was the one, and boy does it hit the spot!”