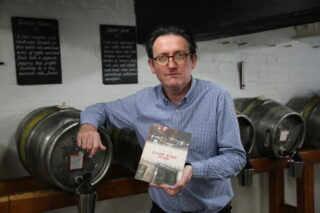 We regret to inform you that Shepherd Neame Communications Executive Johnny Homer passed away on Friday evening (July 9).

Johnny, 56, lived in Whitstable and worked for Shepherd Neame for eight years, joining first as a Visitor Centre Tour Guide then moving to the Marketing Team in 2018. He leaves wife Lydia and daughter Harriet.

Before joining Shepherd Neame Johnny worked as a journalist at What’s On In London, Oracle Teletext, The Press Association and Northcliffe Media, the latter as sports editor of four weekly newspaper titles in Kent. His freelance work appeared in The Guardian, The Face, NME, Melody Maker, Sounds, Vox and several other publications. He was a published author, writing seven books on beer and pubs, with an eighth to be released later this year. He was also a popular broadcaster, best known for his regular contributions to The Robert Elms Show on BBC Radio London during the past two decades.

Born and raised in London’s Finsbury, Johnny was an avid Arsenal supporter and a knowledgeable and passionate advocate for the capital, spending several years offering acclaimed guided walking tours. Dozens of tributes have been paid to him by friends and colleagues online, praising his gentle, compassionate nature, and unique quirky sense of humour.

Chief Executive Jonathan Neame said: “Johnny was a most valued member of our team. He was a fantastic ambassador for the company, for our beers and pubs and played a significant role in promoting Shepherd Neame. He will be greatly missed. His loss is a great shock to us all, and our thoughts and prayers go out to his family at this time.”