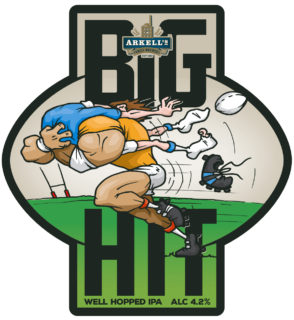 Arkell’s Brewery has launched a brand new seasonal beer, Big Hit, a sumptuous 4.2% ABV to celebrate the upcoming Rugby World Cup in Japan. It is available in a selection of Arkell’s pubs across Wiltshire, Gloucestershire, Berkshire, Hampshire and Oxfordshire areas.

With chocolate malt and wheat notes this beer has an amber colour balanced with a hit of powerfully flavoured hops producing a tropical fruity, hoppy flavour. Big Hit was created by Head Brewer, Alex Arkell, in response to increasing demand from customers for new experimental flavours.

He said: “Big Hit is the perfect brew for the Rugby World Cup. No matter what team you support or even if you are totally new to the game, this new amber beer has been created for long days at the pub watching the match with friends.”

Big Hit has been produced using malted barley from local farmers in Gloucestershire. “We believe that without raw materials of exceptional quality it is impossible to produce great beers. With its own personality, Big Hit is a really straightforward beer that is fantastic to pair with the amazing food offered in our pubs. We’re really excited for everyone to give it a try and to get our customers’ feedback” Alex Arkell added.

“The seasonality of beer gives us an incredible opportunity to connect with our customers by using ingredients and formulas that align with the time of year. Big Hit is an Autumn beer with slightly heavier maltiness and perfect for the crunchy-leaves, chill-in-the-air season we’re about to go into.”

Big Hit is already available and will be on sale for two months during the Rugby World Cup.

Arkell’s Brewery was established in 1843 by John Arkell. Arkell’s is Swindon’s oldest business and one of just 29 family breweries left in the UK. This year Arkell’s is celebrating 176 years in the brewery business and has four members of the Arkell’s family still remaining, Chairman James Arkell, his cousin Nick Arkell, Head of Sales, and James’ sons George, and Alex Arkell are Managing Director and Head Brewer respectively.

The Arkell family work at the brewery alongside generations of other local families, brewing real ale and looking after nearly 100 pubs across Wiltshire, Gloucestershire, Oxfordshire, Berkshire and Hampshire. Arkell’s ales include award-winning beers such as Wiltshire Gold, 3Bs, Kingsdown and Hoperation IPA. Special ales are brewed regularly, with Head Brewer, Alex Arkell, keeping the art of craft ale alive, offering drinkers new tastes and flavours all hand made in their brewery.