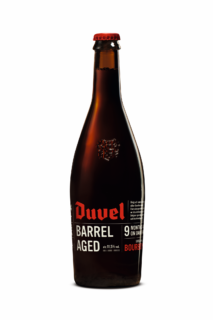 Duvel Moortgat has launched this ultimate gift idea for a Duvel lover – a beer for serving at special moments among foodies and friends.

Barrel Aged Batch No. 4 (11.5% abv) is now available in 75cl bottles.  80,000 bottles can be purchased (RRP £42.50) through specialist retailers in the Netherlands, China and the home Belgian market.  Just 80 cases have landed in the UK, and these bottles are available from specialist beer shops.

In 2017, Duvel Barrel Aged Batch No. 1 was awarded a Gold Medal at the World Beer Awards, before the second and third series of Duvel Barrel Aged followed.  To meet new demand, more than 330 American bourbon barrels were filled for Batch No. 4, which has recently been awarded a gold medal in the Brussels Beer Challenge.

Aged for nine months, Batch No. 4 deserves special treatment.  To deliver the aromas of intense toffee, caramel, a light roast, vanilla and bourbon, the perfect pour for a Duvel Barrel Aged is at 8° C into the specially developed tasting glass, or else a wine glass, tulip glass, or tumbler.

Duvel Barrel Aged is a special tasting beer that was developed with great respect for the authentic taste of Duvel, but with a surprising twist. The gold-coloured specialty beer is aged for nine months in oak bourbon barrels.  From Four Roses Distillery, Woodford Reserve, Jack Daniels, Heaven Hill and George Dickel, the barrels are still infused with the original bourbons, which creates an alluring Duvel mouthfeel with powerful notes of bourbon, vanilla and caramel.

Says Hedwig Neven, brewmaster at Duvel Moortgat: “The Duvel brewers have not been sitting still in recent months, but our specialty beer has been doing just that.  Lovers of beer, Duvel, and whiskey can once again enjoy Duvel Barrel Aged now that the barrels are opened after their long rest and the bottles have finally been filled!”

Duvel Barrel Aged stands for refined enjoyment, shared with friends and family, and is perfect for serving at the end of a celebratory meal or is a great combination with raw or smoked fish, sushi, grilled or smoked meat, cheeses, exotic fruit and chocolate.