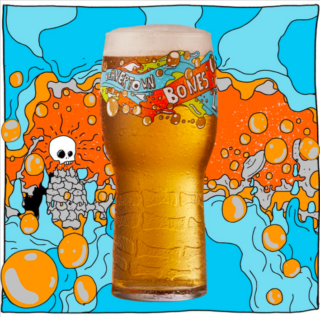 Beavertown Brewery is celebrating the launch of its new lager, Bones, by giving away over 8000 pints to lucky recipients across 100 venues around London and Manchester. Next weekend, lucky Mancunians can get their hands on free pints of the new ‘Dead Refreshing, Dead Crisp, Dead Good’ Lager at several venues around the city.

Manchester-based Beavertown fans are in for a treat with pints of Bones being handed out at Dog Bowl (57 Whitworth St West) and Kielys (Great Northern Tower) on Friday October 17th and Clubhouse (Irwell Square), Northern Soul (Unit 20, 44 Tin Street) and Blackdog Ballroom (Corner of Tib & Church Street) on Saturday 18th. Those unable to make it earlier in the weekend can head down to NQ64 (2 Short Street) on Sunday 19th of October to get their hands on the brand new lager, the perfect way to wrap up a weekend.

Not only will pub goers get to claim a free pint of Bones lager, but they’ll also be able to play “Spin to Win” to be in with the chance of nabbing some exclusive Beavertown merch. Head down to your local to find out what’s up for grabs.

Bones was launched in August 2021 after having been perfected by Beavertown over the past 5 years, using the skills honed from making some of its most iconic beers to create its ‘Dead Refreshing. Dead Crisp. Dead Good’ lager. Bones is a 4.4%, crisp and refreshing – a beer that will hit the spot from the first pint to the last. Simple and immensely drinkable with a touch of Beavertown magic sprinkled on it, it’s available now on tap at various venues across the UK, as well as via Beavertown Brewery’s webshop.

Beavertown is dedicated to crafting high quality, innovative beers like Bones, Gamma Ray and Neck Oil that appeal to the thirsty masses, as well as more experimental brews from our Tempus Project. From brewing to branding, we believe in creativity in everything we do.