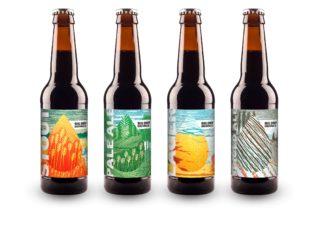 Big Drop Brewing Co., the UK’s first brewing company dedicated exclusively to making only the finest <0.5% ABV beer, is celebrating its first anniversary with a series of exciting announcements.  These include the launch of two new beers, new branding to reflect its countryside inspiration and award recognition for both of its original beers.

The anniversary celebrations have started in great style with the announcement that Big Drop Chocolate Milk Stout has been awarded a Gold Medal in the International Beer Challenge whilst Big Drop Citrus Pale Ale was named World’s Best Pale Beer, low-strength, at the World Beer Awards. Chocolate Milk Stout also received a World Beer Awards silver medal in the UK Country competition for flavoured stout and porter, having been judged in a field with full strength beers.  “We’ve had a fantastic reaction to our first two beers” commented Founder Rob Fink “and to receive honours in these two highly respected beer awards rounds off a hectic but hugely successful first year.  For Chocolate Milk Stout to be judged so favourably in the company of full strength UK stouts and porters proves that low strength doesn’t have to mean low flavour and that Big Drop is leading development of this category.  Recognition for both beers after just one year really is the icing on the cake.”

Focus then switches to Big Drop Lager and Spiced Ale which are being launched at Club Soda’s Mindful Drinking Festival at Bermondsey Square on Sunday 13th August as part of the company’s sponsorship of the inaugural event.  They provide a long-awaited expansion of the 0.5% ABV range of full flavoured craft beers which offer a credible choice for those who choose to moderate their alcohol consumption and which already includes the award-winning Chocolate Milk Stout and Citrus Pale Ale.

“Having worked with brewer Johnny Clayton to devise a brewing technique that delivers a tasty beer that’s low in alcohol but doesn’t compromise on real depth of flavour I’m pleased that our lager and spiced ale offer further variety to develop the category” said Fink.  “For pubs, bars, restaurants, hotels and off trade retailers it’s no longer enough to simply add a low alcohol beer to their stocking list.  Consumers are increasingly turning to this sector for any number of reasons – from health considerations to drink driving concerns –  but are still looking for taste and inclusion when they socialise with family and friends.  They’re looking for a dependable and tasty beer in this space and with the category growing at 6.4% year on year* great tasting, low strength beers offer huge growth potential.”

Big Drop Lager has aromas of cracker, light honey and pepper and provides a dry, refreshing bite whilst Spiced Ale has ginger and cinnamon aromas balancing out warm malts. The palate is a mixture of malt and spice with a sweet berry aftertaste.

Big Drop recently announced that its nomad brewing capacity has been increased to meet exceptional demand and all four beers will continue to be brewed under the expert management of brewer, Johnny Clayton.

The full range of Big Drop beers has been given a fresh look with creative branding designed by Suffolk landscape artist, Helen Maxfield.  “I took a lot of inspiration from the countryside of my Suffolk roots when developing Big Drop beers” explained Fink “and Helen’s wonderful imagery of that area, including Rendlesham Forest and Shingle Street, has been incorporated into the identity of the beers with a distinctive rebrand to reflect the individual character of each beer whilst providing continuity across the range.”

Aromas of cracker, light honey and pepper this lager is crisp, balanced with a suitable level of bitterness to ensure it has a dry, refreshing bite. Keep it nice and chilled. We drink it straight from the bottle. Feel free to pour yours into a glass if you want. Goes well with any food eaten on a hot summer’s day.

Aromas of ginger and cinnamon balance out warm malts. The palate is a mixture of malt, spice with a sweet berry aftertaste. One to warm up a little before serving in an old-school beer glass. You can enjoy this delicious beer at any time of year, but it’s better if there’s a bit of a chill in the air and you’ve roasted something in the oven for a couple of hours. Perfect for the winter and festive season.

Helen is a landscape artist based near Needham Market, Suffolk who specialises in lino cut designs.  Her work is inspired by the local countryside and the care and love that she channels into her craft reflects the art of brewing Big Drop beers.  Each lino cut is original and represents time-consuming dedication which avoids the staleness of mass produced prints.  Further information available at http://www.helenmaxfield.com.

Big Drop was the first brewing company to be dedicated exclusively to making the finest <0.5% ABV beer after founder, Rob Fink, identified a lack of choice in low/no alcohol beers.  Further research revealed a gap in the market for a craft brewery dedicated solely to production of great quality, low alcohol beer that was full of flavour.

In August 2016, Rob and design supremo James Kindred established Big Drop Brewing Co with Johnny Clayton, former brewer at Wild Beer and one of the finest experimental brewers in the business, embracing the challenge and joining a month later.  The rest is history in the making!