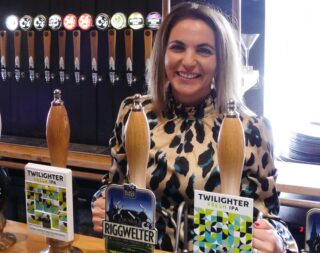 Black Sheep Brewery is encouraging the public to make pubs the heart of their communities in 2021 when Covid restrictions are lifted.

In a message to customers and fans of the North Yorkshire brewery, Chief Executive Charlene Lyons believes that the vaccine breakthrough will help unlock areas of society that the nation has missed, most notably the opportunity to socialise with friends and family.

Charlene says that for generations pubs have been the hub for community activity and in a post-Covid era, they can again take their place as a key meeting place where people can get back to enjoying spending time together.

It will also be a huge boost to pubs and restaurants that, despite considerable and successful efforts to make their venues Covid-secure, have been disproportionality impacted by lockdown and tier restrictions from the government.

Black Sheep Brewery has also had to deal with the consequences of the pandemic restrictions as it was unable to supply a large proportion of its pub trade customers for much of the year.

It quickly adapted to ensure it could keep its customers supplied with their favourite Black Sheep beers with online sales increasing by 1500 percent and a door-to-door delivery service proving exceptionally popular across areas of Yorkshire and the North East.

Charlene Lyons, Chief Executive of Black Sheep Brewery, said: “We all love to head to the pub, not just for the beer and food, but for the social experience that we have all so desperately missed this year.

“The development of vaccines will not only help save lives; we also hope they will be key to unlocking so many other parts of our society that we have previously taken for granted. As we step out of the shadow of Covid in 2021, it will be the perfect opportunity to, once again, place the pub at the centre of our communities.

“We have all found that being separated from friends and family, or even just socially distanced from them, has made us realise what we have missed in the past year.  As a society we have created communities throughout history, and across the generations they have centred around a location that can bring people together, which has often been the pub.

“Our nation’s pubs have faced a real battle to survive this year, but with the public’s support, they can reclaim their place at the heart of the country, and we can rediscover the joys of socialising with our nearest and dearest.”

THE HIGH-RESOLUTION PHOTOGRAPH TO ACCOMPANY THIS NEWS RELEASE CAN BE DOWNLOADED FROM:  https://www.recognitionpr.co.uk/clients/id/26565