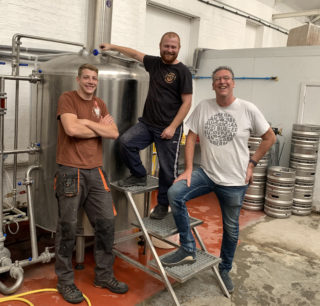 Bohem Brewery is getting out its Czech Bock with the launch of Agnes, a 7% ABV amber lager brewed in collaboration with acclaimed Netherlands craft brewer Brouwerij Kees.

The rich, deep amber brew is the creation of Kees Bubberman, founder of Brouwerij Kees, and Petr Skocek, co-founder and head brewer of London-based Bohem Brewery, which brews authentic Bohemian-style lagers on bespoke brewing equipment from the Czech Republic.

Skocek said: “We used Munich 1 as our base malt, along with Pilsen, Cara Munich 3 and Roasted Barley, as well as Tettnanger and Saaz hops, to come up with a beer that has the character of a great Bock, but also some of our Czech brewing magic in it. Kees is known for adding his own twist to classic beer styles, and the result is Agnes, a unique beer which we’re calling a Czech Bock.”

As a result, Agnes is a 7% deep chestnut coloured bock beer that oozes caramel richness, with a mouthfeel of praline creaminess. The combination of malts delivers a rich flavour profile, with the taste-buds enlivened by a crispness in the finish, while the hop flavour bringing drinkability to this full bodied collaboration beer.

The beer is named for Agnes of Prague, a medieval Bohemian princess known for her good works and charitable outlook. Skocek said: “Although they didn’t have chequebooks in Agnes’s time, she was known for her handouts to the needy, so we’re sure she’d appreciate the gift our Czech Bock is delivering to beer drinkers.

“We like to celebrate figures from Czech history in our beer names, and since our beers are enjoyed by men and women alike, we’re also pleased to be recognising an early example of female empowerment by honouring Agnes.”

Agnes is available in keg while stocks last, in selected London bars including the Bohem Brewery Taproom in London N22. A small quantity will also be canned and sold through the Bohem online shop at www.bohembrewery.com/online-store/.