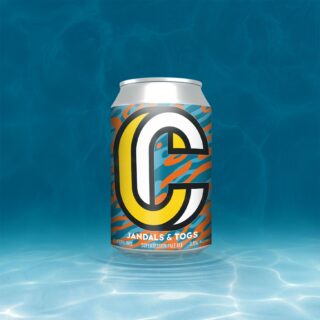 
An estimated 10% of UK consumers* are now following a gluten free diet and with numbers continuing to rise Round Corner Brewing have launched Jandals & Togs. A Gluten Free Super Session Pale Ale.

This latest addition to the line-up of Uncommonly Good Beer, is the first Gluten Free super session pale ale brewed by Round Corner Brewing. With the team always seeking to make the best example in the world of each style of beer they brew, it’s been a long time in the planning. With the brewing team’s endless pursuit of perfection to ensure the beer tastes incredible, it means Jandals & Togs is one the Melton Mowbray brewery are proud to put their name to.

Jandals & Togs (Flip-flops & swim shorts) are staples for New Zealand folk in the all too short summer months. They were made for lolling in the sun with friends and family, where many memories are created with a beer in hand. Which is exactly what this super session pale ale is aimed at creating. A beer to be enjoyed by everyone and memories created no matter the weather.

With a sublime biscuity Vienna and Melanoidin malts balance, and some serious hot-side hopping with Pacific Jade, Wai-iti, Riwaka and Kohatu hops. The result is a soft & deliciously fruity aroma and gentle bitter finish.

Teased with a pre-launch taste weekend at the brewery’s home Taproom in Melton Mowbray’s Cattle Market on Friday 10th and Saturday 11th June, this guilt-free beer has already been received well by customers.

Round Corner Brewing’s Head Brewer and Co-Founder, Colin Paige said: “With many of our customers asking for an easy drinking, lower ABV option, we decided to build upon one of our most successful releases of 2020. We’ve re-worked Jandals & Togs to be a gentle 3.5% Alc/vol super session pale ale and at the same time decided to make it Gluten Free, because we could. Still loaded with plenty of luscious New Zealand Hops, Jandals & Togs is now brewed to be gently hazy and enjoyed with a clear conscience.”

Round Corner Brewing’s CEO and Co-Founder, Combie Cryan said: “Being located in the core East Midlands heartland of Melton Mowbray we noticed that this style of beer was much in demand. So, being in the rural capital of food, which is an area that’s fed the nation for centuries, we set about making the best example of a Gluten Free super session pale ale possible. At Round Corner Brewing we love creating inclusive beers that can and will be drank in a way that reflects the best of the East Midlands and our spiritual home of New Zealand.

“The name for the beer derives from our love for New Zealand, where Colin (Paige) and I met. Jandals & Togs are the uniform for many of our treasured memories on the beach with a beer in hand. We hope with this latest beer we can be a part of many people’s memories created.”

Jandals & Togs is now available for pre-release to newsletter subscribers and trade. It will be available for general sale on Wednesday 15th June 2022.

JANDALS & TOGS
To be labeled as Gluten Free in the UK, beer must contain less than 20ppm gluten. Jandals and Togs is brewed with an enzyme to break down the gluten from barley malt. The beer is then independently analysed to confirm it is gluten free prior to packaging in small batches.

ABOUT ROUND CORNER BREWING
Round Corner Brewing believes craft beer is all about the relentless pursuit of perfection and it’s this pursuit that drives the brewery to make Uncommonly Good Beer.

Founded in 2018 by Colin Paige and Combie Cryan, Round Corner Brewing have been awarded numerous gold, silver and bronze medals at some of the most prestigious awards in the world. These include The European Beer Challenge, International Brewing Awards and The World Beer Awards.

Most notably Round Corner Brewing were awarded the World’s Best Ale & Gold medal at The 2021 International Brewing Awards for their Pale Ale, Steeplechase.