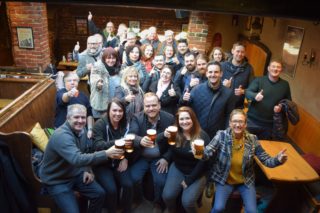 Organisers of the famous Norwich City of Ale have heralded the backing of accountants Farnell Clarke for the 2019 Festival.

This is their third year of involvement, “but it’s their first year of gold sponsorship,” says Dawn Leeder co-founder and organiser of City of Ale. “The increase in their commitment is a real fillip for the Festival. It’s not just their financial help that makes a difference – important though that is. It’s also their level of engagement.

“They are sponsoring the all-important launch party – more details of which will be revealed in the near future. And they are getting creative with ideas round the ale trails, and with proposals for competitions, beer mats and advertising. Just as importantly, they will be supporting trade by bringing customers and colleagues on ale trails and to various events”.

The accountancy firm’s sponsorship was announced at the first meeting of the 2019 City of Ale pubs and breweries, held in the Murderers pub on Timber Hill. It was given a warm welcome.

Frankie Kay from Farnell Clarke says, “As well as having loads of fun with this sponsorship – and we definitely will – there’s a good commercial rationale behind it. We are specialists in the hospitality and leisure sector, and, to give the best possible advice, we need the most up-to-date and comprehensive understanding of the market. That means it’s all part of the job to visit pubs. And we’re pretty evangelical about it.

“Norwich has some of the best pubs in the country, and the region’s brewers produce some of the best beers. It’s a real pleasure to be supporting them through our sponsorship of City of Ale. We’ll be doing all we can to help spread the word, make the Festival even more successful, and build the city’s reputation for its fabulous hospitality and beer!”

The City of Ale Festival takes place Thursday 23rd May – Sunday 2nd June in around 50 characterful pubs throughout the beautiful city of Norwich.