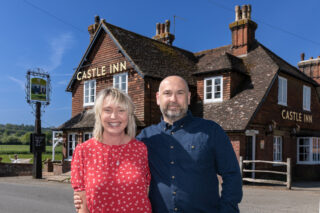 A couple who run a pub in one of the most idyllic locations in the South East, a stone’s throw from a 14th century castle, have celebrated 20 years behind the bar.

Wendy Mills and her husband James fell in love with the Castle Inn at Bodiam and its surroundings, just south west of the Kent border with East Sussex, when they took over – but freely admit now: “We didn’t know what we were doing really!”

Becoming licensees in March 2002, they are grateful that Britain’s oldest brewer, Shepherd Neame was prepared to support them in their dream of running their own pub, despite having little experience at the time. James had been Sous Chef for the previous owners and Wendy had worked behind the bar.

Wendy said: “I just really fell in love with living in the country. My daughter went to the primary school so it was an idyllic childhood for her, but looking back we didn’t know what we were doing really!

“We had to ask the landlord from the pub up the road in the village to help us clean the pipes – it was very much learning on the job for us.”

During their time at the Castle Inn they have seen it transition from a wet-led pub with the majority of customers visiting for after work drinks, to a more food-led establishment, which now has a popular restaurant seating 40. Another key change since they started 20 years ago was the end of smoking being allowed inside the premises.

Wendy said: “It was so different 20 years ago. There was the 5pm drinking trade and it was before the smoking ban. We got married the day the smoking ban was introduced, but I had the last smoke in this bar the night before! There have been a lot of changes, but we are proud that the Castle Inn has always remained at the heart of village life.”

The couple celebrated their landmark anniversary with a trip to London; a visit to Wendy’s favourite restaurant, The Ivy, and a cake featuring the faces of many of their staff over the years who have become lifelong friends, presented to them by their team.

Many team members have been different generations of local families over the years. Wendy said: “We’ve made so many friends. We’re godparents to one of our team’s children. That is the most special thing for me about our time at the pub, the friends we’ve made.”

James, who has worked alongside Head Chef Bob Leeper in the kitchen for the past 12 years, added: “It feels like I’m at work and my friends just come in to see me. They’re not customers to us.”

The pub was the first to have been owned by Guinness back in the 1970s, and is now the only pub to be owned by the National Trust in East Sussex, and leased to Shepherd Neame.

Due to its idyllic location, across the road from Bodiam Castle and surrounded by beautiful English countryside, it proves particularly popular with customers during the summer months.

“Summers are really hectic,” said Wendy. “The last two have been the busiest we’ve ever had. We also have two campsites near us and the Kent and East Sussex Railway so we have many, many visitors.”

The pub, which has a spectacular mural painted on its ceiling in the main bar, also has a large garden which seats 250 and an adjacent field where once helicopters would land bringing visitors.

In addition to their 20th anniversary celebrations, the pair have more to mark this year – Wendy’s 50th birthday and their 15th wedding anniversary.

You can find the Castle Inn at Main Road, Bodiam, TN32 5UB. Food is served from noon to 8pm Monday to Saturday and noon to 5pm on Sundays. Choose from a delicious menu of light bites and traditional pub classics including beer-battered fish and chips and homemade burgers, along with restaurant-style dishes. The family-friendly pub also offers a children’s menu. To find out more call 01580 830330 or visit www.castleinnbodiam.co.uk